Zendesk acquires Smooch, doubles down on support via messaging apps like WhatsApp

One of the bigger developments in customer services has been the impact of social media — both as a place to vent frustration or praise (mostly frustration), and — especially over messaging apps — as a place for businesses to connect with their users.

Now, customer support specialist Zendesk has made an acquisition so that it can make a bigger move into how it works within social media platforms, and specifically messaging apps: it has acquired Smooch, a startup that describes itself as an “omnichannel messaging platform,” which companies’ customer care teams can use to interact with people over messaging platforms like WhatsApp, WeChat, Line and Messenger, as well as SMS and email.

Smooch was in fact one of the first partners for the WhatsApp Business API, alongside VoiceSage, Nexmo, Infobip, Twilio, MessageBird and others are already advertising their services in this area.

It had also been a longtime partner of Zendesk’s, powering the company’s own WhatsApp Business integration and other features. The two already have some customers in common, including Uber. Other Smooch customers include Four Seasons, SXSW, Betterment, Clarabridge, Harry’s, LVMH, Delivery Hero and BarkBox.

Terms of the deal are not being disclosed, but Zendesk SVP  class=”il”>Shawna Wolverton said in an interview that that the startup’s entire team of 48, led by co-founder and CEO Warren Levitan, are being offered positions with Zendesk. Smooch is based out of Montreal, Canada — so this represents an expansion for Zendesk into building an office in Canada.

Its backers included iNovia, TA Associates and Real Ventures, who collectively had backed it with less than $10 million (when you leave in inflated hills surrounding Silicon Valley, numbers magically decline). As Zendesk is publicly traded, we may get more of a picture of the price in future quarterly reports. This is the company’s fifth acquisition to date.

The deal underscores the big impact that messaging apps are making in customer service. While phone and internet are massive points of contact, messaging apps is one of the most-requested features Zendesk’s customers are asking for, “because they want to be where their customers are,” with WhatsApp — now at 1.5 billion users — currently at the top of the pile, Wolverton said. (More than half of Zendesk’s revenues are from outside the US, which speaks to why WhatsApp — which is bigger outside the US than it is in it — is a popular request.)

That’s partly a by-product of how popular messaging apps are full-stop, with more than 75 percent of all smartphone users having at least one messaging app in use on their devices.

“We live in a messaging-centric world, and customers expect the convenience and interactivity of messaging to be part of their experiences,” said Mikkel Svane, Zendesk founder, CEO and chairman, in a statement. “As long-time partners with Smooch, we know first hand how much they have advanced the conversational experience to bring together all forms of messaging and create a continuous conversation between customers and businesses.”

While the two companies were already working together, the acquisition will mean a closer integration.

That will be in multiple areas. Last year, Zendesk launched a new CRM play called Sunshine, going head to head with the likes of Salesforce in helping businesses better organise and make use of customer data. Smooch will build on that strategy to bring in data to Sunshine from messaging apps and the interactions that take place on them. Also last year, Zendesk launched an omnichannel play, a platform called The Suite, which it says “has become one of our most successful products ever,” with a 400 percent rise in its customers taking an omnichannel approach. Smooch already forms a key part of that, and it will be even more tightly so.

On the outbound side, for now, there will be two areas where Smooch will be used, Wolverton said. First will be on the basic level of giving Zendesk users the ability to see and create messaging app discussions within a dashboard where they are able to monitor and handle all customer relationship contacts: a conversation that was inititated now on, say, Twitter, can be easily moved into WhatsApp or whatever more direct channel someone wants to use.

Second, Wolverton said that customer care workers can use Smooch to send on “micro apps” to users to handle routine service enquiries, for example sending them links to make or change seat assignments on a flight.

Over time, the plan will be to bring in more automated options into the experience, which opens the door for using more AI and potentially bots down the line. 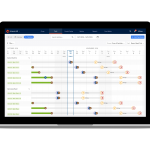