Shedul, the booking platform for salons and spas, raises $20M Series B at a $105M valuation

Shedul, the online booking platform for salons and spas, has raised $20 million in Series B investment of, valuing the company at $105 million.

The round was led by Paris headquartered VC Partech, with participation from Berlin-based Target Global, Dubai-based BECO Capital, and New York’s FJ Labs. In addition, personal investments were made by Jonathan Green, Partner at New York-based hedge fund Luxor Capital, and entrepreneur Niklas Östberg, Founder and CEO of Delivery Hero.

I also understand the fundraise was oversubscribed, and on top of the $20 million included $3 million on secondary funding. The Series B brings the total amount raised by Shedul to $32 million to date.

Launched in 2015, Shedul describes itself as a “SaaS-enabled marketplace” for salons and spas globally. It’s core — and free product — is a SaaS designed to help salons and spas manage their day-to-day sales and operations. Features include managing bookings, point-of-sale, customer records, inventory, and financial reporting. 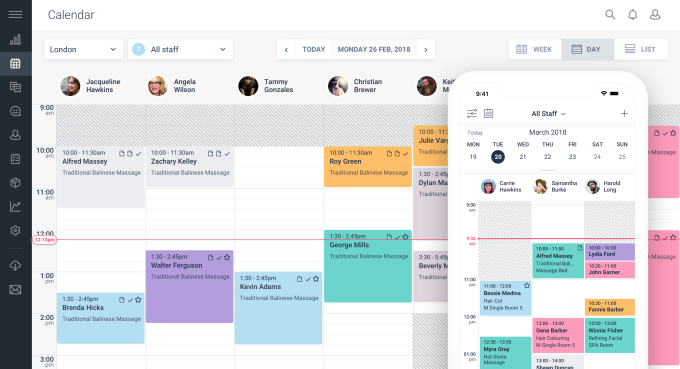 Running in tandem is the more recently launched Fresha.com, a B2C marketplace for salons and spas. The idea is to enable merchants using the free Saas to run their businesses to also be able to connect to consumers online. The consumer-facing mobile app and website supports online bookings and automated marketing, including via integrations with Instagram, Facebook and Google.

In other words, come for the free SaaS and stay for the revenue generating marketplace — which is how Shedul also generates revenue through taking a commission on each booking.

Explains Nick Miller, Shedul co-founder and Chief of Product: “The market is highly competitive, crowded with legacy software providers who charge excessive fees to simply access their products. We’ve re-invented the business model by offering our business software totally free of charge, and instead monetise online bookings made through our marketplace. This strategy helps us consolidate the industry, building up a vast global network of merchants for our marketplace”.

To that end, Shedul is disclosing that 8 million appointments are booked on its platform each month, at a value of over $270 million. Growth in active merchants is expanding at an average rate of 20 percent quarter-on-quarter. The current customer base of merchants spans more than 120 countries, mainly in the U.S., U.K., Australia and Canada.

The company says it is on track to process $6 billion worth of appointment bookings by the end of 2019. “We solved the chicken and egg problem of reaching marketplace liquidity, letting us rapidly scale and monetise the network,” adds Miller.