WeTransfer, the Amsterdam-headquartered company that is best know for its file-sharing service, is disclosing a €35 million secondary funding round.

The investment is led by European growth equity firm, HPE Growth, with “significant” participation from existing investor Highland Europe. Being secondary funding — meaning that a number of shareholders have sold all or a portion of their holding — no new money has entered WeTransfer’s balance sheet.

We are also told that Jonne de Leeuw, of HPE, will replace WeTransfer co-founder Nalden on the company’s Supervisory Board. He joins Bas Beerens (founder of WeTransfer), Irena Goldenberg (Highland Europe) and Tony Zappalà (Highland Europe).

The exact financial terms of the secondary funding, including valuation, aren’t being disclosed. However, noteworthy is that WeTransfer says it has been profitable for 6 years.

“The valuation of the company is not public, but what I can tell you is that it’s definitely up significantly since the Series A in 2015,” WeTransfer CEO Gordon Willoughby tells me. “WeTransfer has become a trusted brand in its space with significant scale. Our transfer service has 50 million users a month across 195 countries, sharing over 1.5 billion files each month”.

In addition to the wildly popular WeTransfer file-sharing service, the company operates a number of other apps and services, some it built in-house and others it has acquired. They include content sharing app Collect (claiming 4 million monthly users), sketching tool Paper (which has had 25 million downloads) and collaborative presentation tool Paste (which claims 40,000 active teams).

“We want to help people work more effectively and deliver more impactful results, with tools that collectively remove friction from every stage of the creative process — from sparking ideas, capturing content, developing and aligning, to delivery,” says Willoughby.

“Over the past two years, we’ve been investing heavily in our product development and have grown tremendously following the acquisition of the apps Paper and Paste. This strengthened our product set. Our overarching mission is to become the go-to source for beautiful, intuitive tools that facilitate creativity, rather than distract from it. Of course, our transfer service is still a big piece of that — it’s a brilliantly simple tool that more than 50 million people a month love to use”.

“Each piece of creative is fully produced in-house by our creative studio with an uncompromising focus on design and user experience,” explains the WeTransfer CEO. “With full-screen advertising, we find that our users don’t feel they’re simply being sold to. This approach to advertising has been incredibly effective, and our ad performance has far outpaced IAB standards. Our advertising inventory is sought out by brands like Apple, Nike, Balenciaga, Adobe, Squarespace, and Saint Laurent”.

Alongside this, WeTransfer says it allocates up to 30% of its advertising inventory and “billions of impressions” to support and spotlight up-and-coming creatives, and causes, such as spearheading campaigns for social issues.

The company has 185 employees in total, with about 150 in Amsterdam and the rest across its U.S. offices in L.A. and New York. 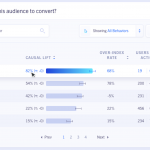