ClearBrain launches analytics tools focused on connecting cause and effect

Businesses need to understand cause and effect: Someone did X and it increased sales, or they did Y and it hurt sales. That’s why many of them turn to analytics — but Bilal Mahmood, co-founder and CEO of ClearBrain, said existing analytics platforms can’t answer that question accurately.

“Every analytics platform today is still based on a fundamental correlation model,” Mahmood said. It’s the classic correlation-versus-causation problem — you can use the data to suggest that an action and a result are related, but you can’t draw a direct cause-and-effect relationship.

That’s the problem that ClearBrain is trying to solve with its new “causal analytics” tool. As the company put it in a blog post, “Our goal was to automate this process [of running statistical studies] and build the first large-scale causal inference engine to allow growth teams to measure the causal effect of every action.”

You can read the post for (many) more details, but the gist is that Mahmood and his team claim they can draw accurate causal relationships where others can’t. 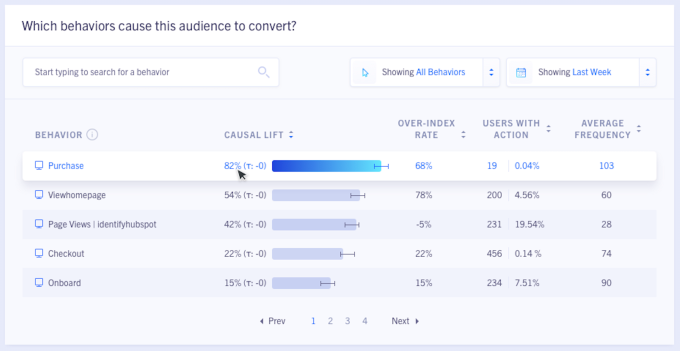 The idea is to use this in conjunction with A/B testing — customers look at the data to prioritize what to test next, and to make estimates about the impact of things that can’t be tested. Otherwise, Mahmood said, “If you wanted to measure the actual impact of every variable on your website and your app — the actual impact it has on conversation — it could take you years.”

When I wrote about ClearBrain last year, it was using artificial intelligence to improve ad targeting, but Mahmood said the company built the new analytics technology in response to customer demand: “People didn’t just want to know who was going to convert, they wanted to know why, and what caused them to do so.”

The causal analytics tool is currently available to early access users, with plans for a full launch in October. Mahmood said there will be a number of pricing tiers, but they’ll be structured to make the product free for many startups.

In addition to launching the analytics tool in early access, ClearBrain also announced this week that it’s raised an additional $2 million in funding from Harrison Metal and Menlo Ventures.