Yodel.io is a digital receptionist for SMBs taking calls

Yodel.io, an Austria-founded startup that’s developed a “digital receptionist” to help SMBs and other small teams handle in and outbound phone-calls, has picked up $1 million in “pre-seed” funding. It brings total funding to just over $1.8 million.

Backing this round is EXF Alpha, the fund of the European Super Angels Club, and various other unnamed European angel investors. This investment will be used to establish a New York office, in addition to the startup’s existing presence in Vienna, London and San Francisco.

In development since 2016 and a Seedcamp alumni, Yodel’s tech acts as a digital phone receptionist that plugs into popular team chat applications such as Slack, Zapier, and Drift to help SMBs handle calls more efficiently. The idea is to provide these small and medium-sized businesses with call-handling technology more akin to that typically available to larger enterprises but at a price they can afford.

It is similar thinking to Google’s recently launched CallJoy, although Yodel argues its product is better and says it is already used by over 2,000 SMBs in 30 languages across 47 countries.

However, in addition, Yodel says its tech also allows for customisable canned responses, and that its AI is able to ask for a reason for the call and then process calls accordingly. Other features include call conferencing, and the ability to send and receive SMS messages.

“SMBs are stuck with old school phone systems that lack flexibility,” explain two of Yodel’s co-founders, Nina Hödlmayr and Mike Heininger, in an email. “At the same time, customers of SMBs don’t receive the support they expect via the phone, they want the processes and systems of the multinationals, without considering the backend costs.

The pair argue that by using Yodel, less well-resourced companies can offer voice calls for customers, which they argue is still the most direct channel. “This is an effective way of increasing sales and having fewer unsatisfied customers,” they tell TechCrunch. 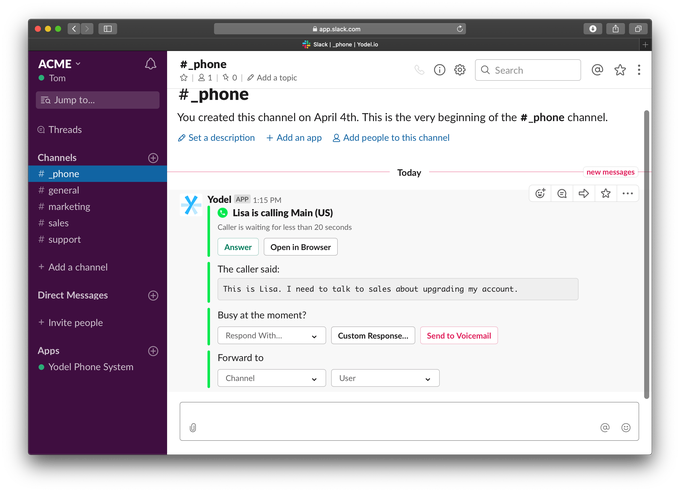 “The caller receives a better experience by being greeted from a digital voice assistant and getting forwarded to the right team member. The company views all information in one place without needing to switch tools. This is also a main benefit for distributed and modern teams. Each bit of information is shared and can be collaborated on which improves decisions and overall internal knowledge”.