The digital revolution in Indonesia, Southeast Asia’s largest economy, continues to attract big money from investors. Hot on the heels of a $50 million round for Bukalapak, a billion-dollar company helping street stall traders to tap the internet, so Warung Pintar, another startup helping digitize the country’s vendors, has pulled in $27.5 million for growth.

Bukalapak is one of Indonesia’s largest e-commerce services and it began catering to local merchants, those who sell product via road-side kiosks, last year, but eighteen-month-old Warung Pintar is focused exclusively on those vendors.

Bukalapak helps them to gain scale through online orders — it claims to have a base of 50 million registered users in Indonesia — but Warung Pintar digitizes kiosk vendors to the very core. At the most basic level, that means aesthetics; so all Warung Pintar vendors get a bright and colorfully-designed kiosk. They also get access to technology that includes a digital POS, free Wi-Fi for customers, an LCD screen for displays, power bank chargers and more.

The project was founded in 2007 by East Ventures, a prolific early-stage investor that has backed unicorns like Tokopedia, Traveloka and Mercari. This new money means that Warung Pintar has now raised just over $35 million from investors to date.

The round — which is a Series B — included participation from existing backers SMDV, Vertex, Pavilion Capital, Line Ventures, Digital Garage, Agaeti, Triputra, Jerry Ng, and EV Growth — the joint fund from East Ventures and Yahoo. They were joined by OVO — a payment firm jointly owned by Indonesian mega-conglomerate Lippo — which has signed on as a new investor and is sure to be highly strategic in nature. OVO works with the likes of Grab, and it is battling to gain a foothold in Indonesia’s fledgling digital payments space, which is tipped to boom among the country’s 260 million population. 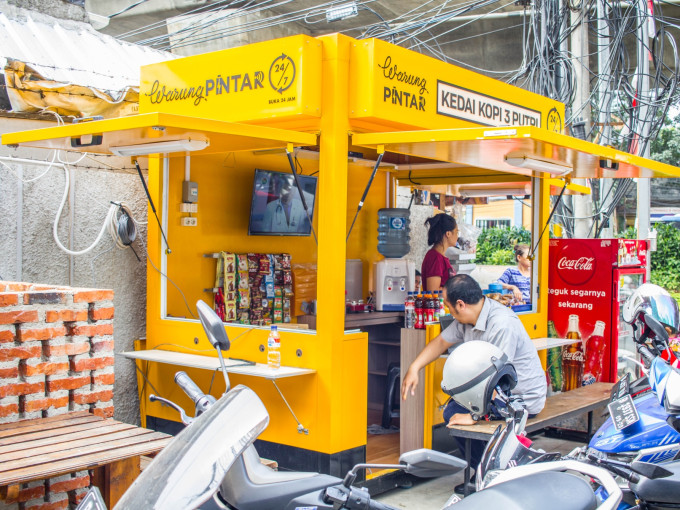 These investors are all betting that Warung Pintar can take off and provide greater functionality for street vendors and consumers alike.

The startup is in growth mode right now so it isn’t fully focused on monetization. The only fee is $5,000 from the vendor, which covers the cost of a new prefab kiosk, while all the tech appliances are provided without fee to help kiosk owners engage with the local community. For example, East Ventures noticed that drivers for Go-Jek or Grab tended to hang around the kiosk store near the VC firm’s office and they were curious how to grow engagement to benefit both parties.

“There are going to be a lot of ways to charge and make money,” East Ventures co-founder and managing partner Willson Cuaca told TechCrunch in an interview. “Once we have built enough, we can manage the supply chain and then figure out of how to make money.”

Indeed, monetization might not be via fees to the kiosk owners themselves, explained Cuaca — who is president of Warung Pintar. Since the company maintains touch points with consumers, it is a commodity that can appeal to brands, manufacturers and others when it reaches nationwide scale.

While there has been promising progress and product market fit in Jakarta, Cuaca and his team see significant growth potential still to be realized.

When we spoke to Warung Pintar just under a year ago, it had just raised a seed round and had been in operation for under six months. Today, the business counts 1,150 kiosks in Jakarta. However, it recently opened up in Banyuwangi, East Java, which, alongside other planned expansions, is aimed to increase its reach to 5,000 kiosks before the end of this year, Cuaca said.

There’s no plan for regional expansion at this point, he added.

The business and model is fascinating but it is conceived and executed in Indonesia, that’s to say it isn’t a problem that could be identified, mapped and solved from the U.S, China or other markets. It’s the type of tech and startup that is helping change daily lives in Indonesia, the world’s fourth largest country by population. Home-grown solutions have been rare in Southeast Asia, but there are increasing opportunities that only local players can cater to and now the region’s VC corpus is substantial enough to provide the capital needed.