JD.com, the Chinese answer to Amazon and Alibaba’s long-time rival, is looking to further automate its logistics network after agreeing to pour 376 million yuan (around $55 million) into Jiangsu Xinning Modern Logistics in exchange for up to 10 percent stake.

That’s according to a filing released on Monday by Xinning, a China-listed logistics firm with supply chain services tailored to consumer electronics. The ally appears as a good fit since much of JD’s revenue is driven by big-ticket electronics and home appliances sales.

In a separate filing on Monday, Xinning said it’s inked a strategic partnership with JD Logistics, JD’s loss-making logistics arm, to build out a big data system that will boost efficiency and cut costs by optimizing matches between cargos and vehicles. The digital solution aims to reach 200 thousand vehicles by 2020 and over 2 million eventually, and will fulfill both JD’s in-house as well as its third-party demand but will prioritize the former.

JD separates itself from its rivals by keeping a logistics unit and carrying its own inventory, a costly strategy which the firm markets as an assurance for better quality control and user experience. By comparison, Alibaba and ecommerce upstart Pinduoduo outsource their logistics needs to third-party partners.

JD’s hefty spending on logistics has long tested investor patience, but in recent years the behemoth started to more aggressively monetize the massive infrastructure network it first constructed for its in-house business. In late 2016, JD opened its logistics service to third-party merchants and further expanded the offering to consumers who can now mail packages through JD as they would with FedEx.

The opening up has begun to reap early rewards in terms of cost-saving. In the first quarter, JD’s fulfillment expenses ratio was down 0.5 percent year-over-year to 6.7 percent, driven by “better utilization of logistics infrastructure and improved unit economics as a result of the third-party logistics service business,” said chief financial executive Sidney Huang in the company’s earnings call last week.

Huang pointed out the cost improvement had come prior to the recent wage and benefit changes in JD’s delivery unit. In April, the ecommerce firm announced it would remove minimum wages for its couriers in favor of a per-piece incentive scheme, a decision that industry observers worry would damage couriers’ morale. Contrary to speculation, most of its delivery staff saw income boost following the change, and JD does “not expect to realize any meaningful cost savings” from the transition, according to Huang.

On a larger scale, JD’s net income attributed to ordinary shareholders set a record high 7.3 billion yuan ($1.06 billion) in the first quarter, mainly driven by the fair value change of investments during the quarter although JD did not specify which funding activity accounted for the spoils. Revenues increased 20.9 percent to 121.1 billion ($18 billion), which was the slowest growth the company ever logged but the figure surpassed analysts’ estimate.

The record-smashing season came while JD is ensnarled in a high-profile lawsuit that charges its founder and CEO Richard Liu of raping a Chinese student at the University of Minnesota. If charged and convicted, the executive, who owns nearly 80 percent of the company’s voting rights, could face up to 30 years in prison. 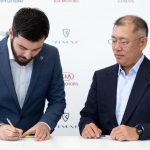