Go-Jek confirms first close of $2B Series F round at $9.5B valuation

Go-Jek, the Indonesia-based ride-hailing company that is challenging Grab in Southeast Asia, has announced the first close of its Series F round, as TechCrunch reported last week. The company isn’t revealing numbers but sources previously told us it has closed around $920 million. Go-Jek is planning to raise $2 billion for the round, as reported last year.

Go-Jek said that the first close is led by existing backers Google, JD.com, and Tencent, with participation from Mitsubishi Corporation and Provident Capital. It didn’t provide a valuation but sources told us that week that it is around $9.5 billion.

Starting out with motorbike taxis in 2015, Go-Jek has since expanded to taxis, private car and more. The company said it plans to spend the money deepening its business in Indonesia, its home market, and growing its presence in new market expansions Vietnam, Singapore and Thailand. It is also working to enter the Philippines, where it had a request for an operating license rejected although it did complete a local acquisition after buying fintech startup Coins.ph.

The Go-Jek business in Indonesia includes transportation, food delivery, services on demand, payments and financial services. That’s very much the blueprint for its expansion markets, all of which are in different stages. Go-Viet, its Vietnamese service, offers food delivery and motorbike taxis, Get in Thailand operates motorbike taxis and in Singapore Go-Jek provides four-wheeled car options.

Combined those efforts cover 204 cities, two million drivers and 400,000 merchants, the company said, but the majority of that is in Indonesia.

Grab, meanwhile, became the top dog after buying Uber’s local business, and it operates in eight countries. It recently crossed three billion rides to date and claims 130 million downloads. Grab said revenue for 2018 was $1 billion, it expects that to double this year. It has raised $6.8 billion from investors, according to Crunchbase, and its current Series H round could reach $5 billion.

Go-Jek claims it has 130 million downloads — despite just being in three markets — while it said it reached an annualized transaction volume of two billion in 2018 and $6.7 billion in annualized GMV. Those figures require some explaining as Go-Jek is being a little creative with its efforts to compete with Grab on paper.

Transactions don’t mean revenue — a transaction could be a $1 motorbike ride or a payment via QR code — and GMV is not revenue either, while both are ‘annualized’ which means they are scaled up after measuring a short period. In other words, don’t take these figures too literally, they aren’t comparable to Grab. 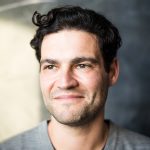 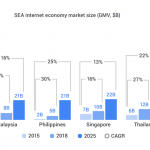