Chinese electric scooter startup Niu Technologies has filed for an initial public offering on Nasdaq to raise up to $150 million. In its form, Niu said it is “the largest lithium-ion battery-powered e-scooters company in China,” according to data from China Insights Consultancy, and also a market leader in Europe based on sales volume.

Founded in 2014 and based in Beijing, Niu says it currently holds a market share of 26% in China based on sales volume. Niu’s debut will the latest in a string of recent Chinese tech IPOs, the most prominent of which include the recent Hong Kong listings of Xiaomi and Meituan.

Niu’s scooters connect with an app that give drivers maintenance and performance data and also delivers firmware updates. As of the end of June, Niu claims it had sold more than 431,500 smart electric scooters in China, Europe and other markets.

According to the CIC’s data, China is the largest market for electric two-wheeled vehicles, with retail sales expected to increase to $13 million by 2022, up from $8 billion in 2017. Niu says its growth markets also include Southeast Asia and India, where scooters are a popular form of transportation. 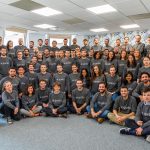