Zoom, the video conferencing startup valued at $1 billion in early 2017, has filed to go public on the Nasdaq as soon as next month.

The company joins a growing list of tech unicorns making the leap to the public markets in 2019, but it stands out for one very important reason: It’s actually profitable.

Zoom was founded in 2011 by Eric Yuan, a co-founder of WebEx, which sold to Oracle for $3.2 billion in 2007. Before launching Zoom, he spent four years at Cisco as its vice president of engineering. In a conversation with TechCrunch last month, he said he would never sell another company again, hinting at his dissatisfaction at WebEx’s post-acquisition treatment being his motivation for taking Zoom public as opposed to selling.

Zoom is backed by Emergence Capital, which owns a 12.5 percent pre-IPO stake, according to the IPO filing. Other investors in the business include Sequoia Capital (11.4 percent pre-IPO stake); Digital Mobile Venture (9.8 percent), a fund affiliated with former Zoom board member Samuel Chen; and Bucantini Enterprises Limited (6.1 percent), a fund owned by Li Ka-shing, a Chinese billionaire and among the richest people in the world.

Morgan Stanley, JP Morgan and Goldman Sachs have been recruited to lead the offering. 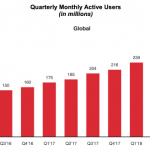