Why we’re still waiting on the Postmates S-1

The San Francisco-based on-demand delivery business was expected to publicly file its IPO prospectus in September in preparation for a fall exit, sources familiar with the matter told TechCrunch this summer. September, however, has come and gone and we’re still waiting on Postmates to release the critical document.

“The reality is that we will IPO when we believe we find the right time for the business and the right time for the markets,” Lehmann told TechCrunch. “And if you look at the markets right now, I believe they are a little choppy. They are a little choppy when it comes to growth companies specifically … We are hopeful that we find a good window to get out there.”

Lehmann made reference to Uber and other companies to recently float, citing market conditions as an IPO deterrent. Uber, Lyft, Slack and other fast-growing unicorns have struggled since entering the public markets earlier this year despite sky-high private market valuations. WeWork, a money-losing endeavor, recently decided to delay its IPO after demand from Wall Street devalued the business by the billions. Whether Postmates will complete its debut by the end of the year is unclear.

Postmates confidentially filed with the U.S. Securities and Exchange Commission for an IPO in February. Shortly after, Postmates held M&A talks with DoorDash, another food delivery unicorn, according to people familiar with the matter, but failed to come to mutually favorable terms. DoorDash has previously declined to comment on these reports. On stage last week, Lehmann declined to confirm the reports.

“I don’t think it does any good to speculate on M&A,” he said. “I think you have four well-funded players here in the U.S. in this space. I think everyone is well aware of the strengths and the weaknesses of each other and you know at some point down the line, if we take Europe for example, you will see consolidation in the market. People have conversations all the time but I wouldn’t read too much into it.”

Postmates operates its on-demand delivery platform, powered by a network of local gig economy workers, in more than 3,500 cities across all 50 states. The company does not yet operate in any international markets aside from Mexico City, however, Lehmann’s comments suggest the business could be plotting a foray into Europe, where Deliveroo, Just Eat and others dominate the market.

Postmates has raised about $900 million to date, including a $225 million round announced last month that valued the company at $2.4 billion. DoorDash, on the other hand, reached a $12.6 billion valuation in May with a $600 million Series G and has raised more than double that of Postmates. When asked why DoorDash, a similar and competing business, needed that much more capital, Lehmann joked “Maybe [DoorDash CEO Tony Xu] needs a jet, I don’t know.”

Postmates, founded in 2011 by Lehmann, is backed by Spark Capital, Founders Fund, Uncork Capital, Slow Ventures, Tiger Global, Blackrock and others. In our interview with Lehmann, the long-time CEO discussed the ‘choppy’ public markets, competitors, the company’s autonomous robotics delivery efforts and more. 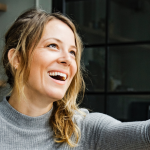