WeWork, now known as The We Company, released its IPO prospectus Wednesday morning months after filing confidentially to go public. The company indicated plans to raise $1 billion in what is likely a placeholder amount.

Backed by billions from SoftBank and its mammoth Vision Fund, the highly-anticipated float is expected as soon as next month.

The New York-based company, valued at $47 billion earlier this year, has long been rumored to be plotting a massive IPO despite towering losses. The business recently disclosed 2018 net losses of $1.9 billion on revenue of $1.8 billion. To convince Wall Street it’s a business worthy of their investment will be a challenge, to say the least.

In its S-1 filing, WeWork disclosed revenue north of $1.5 billion in the six months ending June 30 on losses of $904.6 million.

WeWork has raised a total of $8.4 billion in a combination of debt and equity funding since it was founded in 2011. According to earlier reports from The Wall Street Journal, it’s also pursuing an asset-backed loan worth upwards of $6 billion in what could be an effort to downsize its stock offering.

Its IPO is poised to become the second-largest offering of the year behind only Uber, which was valued at $82.4 billion following its May IPO on the New York Stock Exchange.

WeWork plans to sell shares of its stock under the ticker symbol “We” with the share price yet to be determined. The stock exchange was not listed.

SoftBank, unsurprisingly, JP Morgan and Benchmark are to be the big winners of the upcoming exit. The investment funds own roughly 114 million and 33 million pre-IPO shares.  Benchmark, a venture capital fund, led a $17 million financing in the business in 2012.

Even with fast growth and a global presence, WeWork has come to represent Silicon Valley’s tendency to inflate valuations. WeWork, a real estate business with tech-enabled services built on top, burns through cash rapidly and has had a tough time plotting out a clear path to profitability.

As it gears up to transition into the public markets, WeWork, planning to open co-working spaces in an additional 169 locations, says it currently has 149 million potential members with a potential addressable market of $945 billion based on 2019 membership revenue figures. Ultimately, WeWork says it hopes to reach 255 million people across 280 target cities — a market opportunity worth an eye-popping $1.6 trillion, or more than that of Apple and Microsoft.

This story is updating 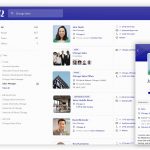