Unagi is the iPhone of scooters you actually buy

Can you never find a scooter to rent when you need one? Here’s a radical idea. Buy one. While Bird, Lime, Skip, Scoot, Uber, Lyft and more compete for on-demand micromobility, a new startup invented a vehicle worthy of ownership. The Unagi looks downright futuristic with its classy paint jobs, foldable body, LED screen, and built-in lights. The ride feels sturdy, strong, and responsive while being light enough at 24lbs to lug up subway stairs or the flights to your home.

That’s why Unagi has become a hit with musicians like Kendrick Lamar, Chance The Rapper, Halsey, Steve Aoki, and teen pop megastar Billie Eilish, who use the scooter to rip around the empty venues as they soundcheck before concerts. Paparazzi shots of those moments have spurred demand for the $990 dual motor and $840 single motor Unagis, with co-founder David Hyman telling me the startup can’t make them fast enough but it’s ramping up production.

To fuel the fervor for the scooter before it’s inevitably copied by cheap knock-offs, Unagi has raised a $3.15 million seed round led by Menlo Ventures. Building on its $750,000 in Kickstarter, angel, and founder-contributed funding, the cash will go to building out a distribution network and developing its next-gen scooter with a smoother ride but no more pounds.

“We felt Unagi’s focus on light weight and substantial powering in a beautifully designed package was the right approach for ownership” Menlo partner Shawn Carolan tells me. “This is what premium brands do – continue to reinvent the way we think about the world. This category of vehicle – personal, portable, and electric has enormous potential and we are still in the first inning of the game.”

The magic of the Unagi Model One is how it balances speed, battery, weight, price, and style so it works for most anything and everyone. That combination won it CNET‘s best all-around scooter award versus the hardcore but extremely heavy Boosted Rev, cheap but weak Swagtron, long-lasting but boring Ninebot, and speedy but scary Mercane.

The Unagi’s biggest flaw is the smoothness of the ride due to its harder airless wheels and narrow handlebars that can make gravelly roads precarious. The high-pitched beeeeeep of its horn is also so annoying that people are more likely to cover their ears than get out of your way, but Hyman promises his 12-person team will fix that. 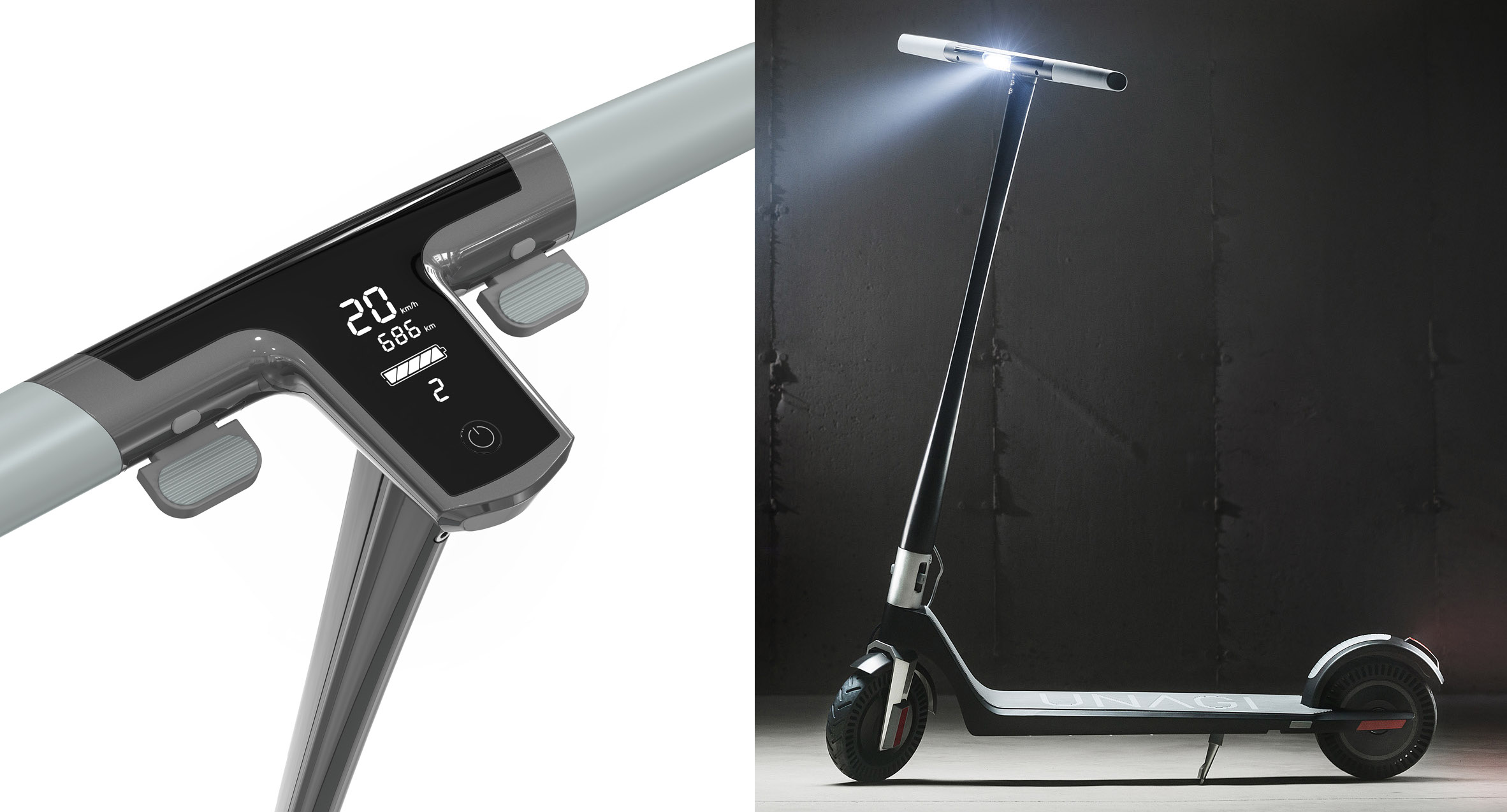 Where Unagi truly excels is in its looks. The lithe curves of its polished carbon fiber frame are accented with candy paint jobs in matte black, white, grey, and blue. It ditches the bike handlebar vibe for something closer to space shuttle controls. And while many people scoff at scooter riders, I saw those smirks turn into curious awe as I flew by.

Hyman got the idea for a premium scooter you own after a rental turned into a melty mess. He’d taken an on-demand scooter to the grocer on a hot day, picked up some ice cream, and emerged to find his ride snatched by another user. He hustled to another nearby but someone else got their first. He walked home dripping sugar everywhere wondering “Why am I messing around with rentals i just want to own one?”

He bought a generic scooter off Alibaba, and despite being janky straight out of the box “it made me feel like I was a super hero with this magic carpet”. But he wanted something better.

Previously the CEO of audio fingerprinting giant Gracenote and then Beats Music before it sold to Apple, Hyman is known for his obsession with hi-fi speaker systems. So after touring Chinese scooter factories and still being unsatisfied, he partnered with a group of inventors called QMY who’d prototyped a slick vehicle they called the Swan. Hyman funded it to production, brought the team in house, and now they’re selling Unagis as fast as they can.

Now the startup wants to double-down on selling to more petite riders who could never carry the 46lb Boosted Rev out of a train station. But the clock is ticking before copycats with similar silhouettes but inferior insides spring up. Meanwhile, Unagi must keep safety top-of-mind to avoid any disastrous crashes hurting customers and its brand. There are plenty of better funded mobility giants that could barge into the space if Unagi can’t build a lead. It also has to prove why the reliability of ownership is worth the price of renting a scooter hundreds of times.

Scooters are part of a powerful wave of new technologies that actually sell us back our time. When a 20-minute walk becomes a 4-minute scoot, you gain something priceless. Urban landscapes unfold beneath their wheels as you explore new neighborhoods or parts of parks. I was once a diehard electric skateboarder until a crash on a Boosted Board shattered my ankle. Unagi is the first scooter that delivers that same gliding feeling of weightlessness and freedom but in a form-factor safe enough for most people to experience.