Twitter buys a startup to battle harassment, e-cigs are booming, and a meditation app is worth $250M

Hello and welcome back to Equity, TechCrunch’s venture capital-focused podcast where we unpack the numbers behind the headlines. This week TechCrunch’s Silicon Valley Editor Connie Loizos and I jammed out on a couple topics as Alex Wilhelm was out managing his fake stock game spreadsheets or something. (The jury is out on whether this was a good or bad thing.)

First up is Twitter buying Smyte, a startup targeting fixes for spam and abuse. This is, of course, Twitter’s perennial problem and it’s one that it’s been trying to fix for some time — but definitely not there yet. The deal terms weren’t disclosed, but Twitter to its credit has seen its stock basically double this year (and almost triple in the past few years). Twitter is going into a big year, with the U.S. midterm elections, the 2018 World Cup, and the Sacramento Kings probably finding some way to screw up in the NBA draft. This’ll be a close one to watch over the next few months as we get closer to the finals for the World Cup and the elections. Twitter is trying to bill itself as a home for news, focusing on live video, and a number of other things.

Then we have Juul Labs, an e-cigarette company that is somehow worth $10 billion. The Information reports that the PAX Labs spinout from 2015 has gone from a $250 million valuation all the way to $10 billion faster than you can name each scooter company that’s raising a new $200 million round from Sequoia that will have already been completed by the time you finish this sentence. Obviously the original cigarette industry was a complicated one circa the 20th century, so this one will be an interesting one to play out over the next few years.

Finally, we have meditation app Calm raising a $27 million round at a $250 million pre-money valuation. Calm isn’t the only mental health-focused startup that’s starting to pick up some momentum, but it’s one that’s a long time coming. I remember stumbling upon Calm.com back in 2012, where you’d just chill out on the website for a minute or so, so it’s fun to see a half-decade or so later that these apps are showing off some impressive numbers.

That’s all for this week, we’ll catch you guys next week. We apologize in advance if Alex makes it back on to the podcast.

Equity  drops every Friday at 6:00 am PT, so subscribe to us on Apple Podcasts, Overcast, Pocketcast, Downcast and all the casts. 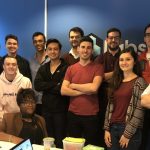