Travelstop is a new startup in Singapore that aims to bring the benefits of business travel management to SMEs and other smaller companies in Southeast Asia.

The company launched its product today after being founded in November 2017 by three entrepreneurs who worked at TravelMob, the Singapore startup bought by HomeAway in 2013. Prior to TravelMob, the trio — Prashant Kirtane (CEO), Vijay Aggarwal (CTO) and Altaf Dhamani (CPO) — worked together at Yahoo Southeast Asia. They all moved over to HomeAway, which was later bought by Expedia for $3.9 billion in 2015 and Travelstop is their first independent venture following that spell.

That’s a huge amount of experience for a newly-formed startup in Southeast Asia, and already it has assembled a team of 12 with more vacancies open.

Kirtane told TechCrunch in an interview that 90 percent of business travel in Asia is unmanaged. That’s surprising since the region accounts for 40 percent of the $1.2 trillion global business travel market. He said that he and his co-founders can also recall the pain of unmanaged or rigid travel and expense systems and are vowing to solve it with Travelstop.

The focus is on simplicity — Kirtane said Slack is its role model for design — with features such as clean UI, automated expense reporting, flexible travel policy, and data-based insight to allow business teams to analyze travel and expense costs. The service includes desktop and mobile apps. 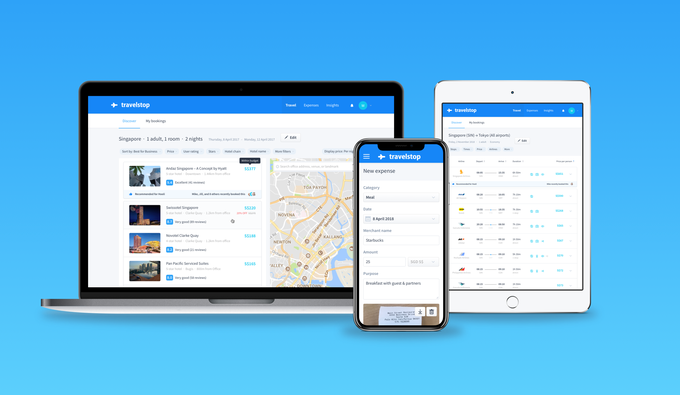 All of these are still missing in Southeast Asia — at least at the price that can appeal to SMEs and startups — while often global services, such as Concur, aren’t sufficiently localized to cover low-cost airlines or a wider array of hotels. (On this, I can agree!)

“Many other tools corporate tools are still rudimentary and haven’t progressed,” Kirane added. “We’re looking to reach mid-size tech companies first, but the – longer-term proposition is to let employees onboard themselves.” 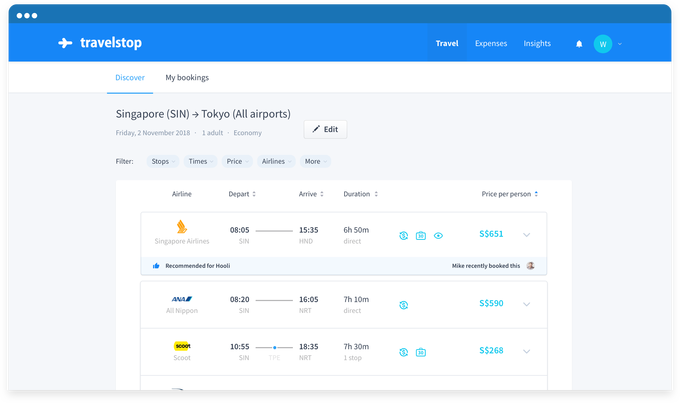 Travelstop is letting early customers use its product for free, but the business model that will arrive soon will be Saas-based. The team is also working to integrate existing systems, including Expensify, and other third-party services to let Travelstop users book travel and claim expenses off-platform.

The company has raised $1.2 million to kick things off, and Kirane said the startup may look to raise more in early 2019 as it begins to expand its engineering and sales teams and launch local offices.

The seed round was led by SeedPlus, the early-stage firm connected with Jungle Ventures, and an unnamed travel-focused firm in the U.S. Travelstop said angel participants included Dan Lynn and Vikram Malhi, ex-Expedia senior business leaders and founders of Zuzu Hospitality Solutions, David Ko, who is president and COO of Rally Health, and Jarrod Howe, who is regional operations director at Hyper Island
Singapore.