Apttus, a quote-to-cash vendor built on top of the Salesforce platform that looked to be heading toward an IPO in recent years has taken a different tack, instead being acquired by private equity firm Thoma Bravo today.

The company did not reveal the purchase price, but said it could be ready to share more details about the arrangement after the deal closes, probably next month. “What we can say is that Apttus views this development positively and believes Thoma Bravo can instill greater operational excellence, strengthen our market leadership and allow us to continue providing indispensable value to our customers,” a company spokesperson told TechCrunch.

They are describing this not as a full on acquisition, but as ‘taking a majority stake’. However you describe it, it probably wasn’t the ending the company envisioned after taking $404 million in investment since launching in 2006, one of the earliest startups to build a business on top of the Salesforce platform.

If the company believed that Salesforce would eventually buy it, that never happened. In fact, that dream probably went out the window when Salesforce bought SteelBrick, a similar company also built on Salesforce, at the end of 2015 for $360 million.

In spite of this, in an interview in 2016, CEO Kirk Krappe still was confident that an exit was coming, either by IPO or a possibly a Salesforce acquisition.

“We will be IPOing this year. That may be a function to figure what Salesforce wants to do and they may think about that [after purchasing SteelBrick at the end of last year]. There’s no reason they can’t buy us too. For me, I have to run the business, and we’re growing 100 percent year on year. If Salesforce came to the table, that would be great if the numbers work. If not, we have an amazingly strong business,” he said at the time.

That never came to pass of course, and the company tried to separate itself from Salesforce in April of 2016 when it released a version of Apttus that would work on Microsoft Dynamics. Krappe saw this as a way to show investors he wasn’t completely married to the Salesforce platform.

While Salesforce provided a system of record around the customer information and all that involved, once the salesperson actually closed in on a sale, that’s when software like Apttus came into play, allowing the company to generate a detailed proposal, a contract once the deal was agreed upon and finally collecting and recording the money from the sale.

Apttus took its last funding rounds in Sept 2017 for $55 million and later a debt financing round for another $75 million in February this year, according to data on Crunchbase.

Thoma Bravo has bought a number of enterprise software products over the years including Qlik, Sailpoint, Dynatrace, Solar Winds and others. Apttus should fit in well with that family of companies. 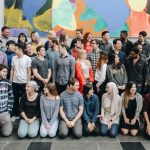