The IPO market is heating up again, but it won’t change how fast companies go public

It’s been an exciting couple of months for startup employees and public market shareholders alike, as a growing number of brands that have talked about going public for some time are finally marching out the door and, on the whole, receiving enthusiastic receptions. Lyft, Zoom, PagerDuty and Pinterest all priced above their marketed ranges in splashy public offerings. Uber is meanwhile veering toward what’s expected to be the biggest IPO in years by seeking what’s rumored to be a $100 billion valuation.

But industry watchers hoping that companies might start going public sooner as they once did may be in for some disappointment. At least, according to industry players with whom we’ve spoken, a broader shift isn’t likely to happen soon — if ever — again. In fact, absent a dramatic development, it’s far more likely that startups will continue staying private as long as they possibly can.

The numbers largely tell the story. According to the investment bank Scenic Advisement, private investors doused technology and biotech companies with $130.9 billion last year — far outpacing the $50.3 billion raised via IPOs and follow-on offerings. Meanwhile, says Scenic, the total value of private market investment surged 57.8 percent in 2018, the tenth consecutive year in which private share sales were worth more than those in public markets. That trend continues, too, with venture investment flows far outpacing public-market fundraising so far in 2019.

Consider that Lyft raised $4.91 billion in the private market versus the roughly $2.34 billion it picked up in its recent IPO. Dropbox, which went public last year, raised $756 million in its IPO, versus the $1.7 billion it raised privately. Uber has raised almost $20 billion privately and is expected to raise around $10 billion in its upcoming offering. (There have also been companies that buck this trend. Zoom raised $161 million privately and raised $750 million when it went public last week. DocuSign, which went public last year, also raised more in its IPO — $630 million — than the $550 million investors had funneled into the company when it was still privately held.)

Those ratios might not change much going forward, despite the current IPO hoopla. “In the early part of this decade, there was relative parity between how much money was raised in venture and how much was raised through IPOs,” says Shriram Bhashyam, a founder and advisor at the secondary trading platform EquityZen. “But private funding has been outpacing IPO proceeds for a few years, and that gap is continuing to grow.”

Even if not all privately held startups are eventual public market candidates, it “gives you an idea directionally” of how the public and private markets are continuing to shift, he suggests.

The public market exchanges readily acknowledge the change. We talked last week with Jeff Thomas, who oversees Nasdaq’s operations for the Western U.S. and who previously spent several years as a president with Nasdaq Private Market, which the exchange formed in 2013 to offer companies alternative liquidity solutions while remaining private.

Thomas talked at length about companies no longer needing to go public in order to access capital, noting there’s a “ton of capital” flooding into private companies and predicting much more is coming. (Note: the $130 billion invested in startups last year broke the previous record of $105 billion plugged into startups in 2000.)

The appeal of staying private is well-known and well-documented. Aside from the easy money available, founders can avoid the scrutiny of research analysts and regulators, not to mention sometimes short-sighted public market shareholders who aren’t afraid to take action when they feel cheated. Lyft is already being sued by shareholders who are angry the company’s shares are down roughly 25 percent from their opening day peak. As Bloomberg recently reported, Snap was sued within 10 weeks of going public; Blue Apron was sued within seven weeks of its IPO.

Still, the public markets aren’t going anywhere, also for well-understood reasons. Even as they shrink compared with the public market, companies that can go public will continue to do so because it’s easier for them to acquire other companies once their shares are converted to common shares, because companies will lose employees if they don’t go public (most private companies limit how much equity employees can sell), and because there’s still a certain cache associated with being a publicly traded company. The last is especially important when it comes to charming other companies into partnerships. “Being a publicly traded company and being able to provide visibility into your balance sheet is very helpful in customer development,” says Thomas.

Taking a company public is also one way to tackle income inequality, which has worsened as more private companies’ investors — already the wealthiest investors in the world — have enjoyed near exclusive access to companies during some of their fastest growing years.

It may not be top of mind for chief executives, but it’s an important point that will hopefully resonate more as these trend lines, and their consequences, grow clearer. “There are now so few people who can participate in the private market on a relative basis,” says Thomas. “America stands for life, liberty, and the pursuit of happiness, including having enough money to pay for college and retirement.” The ongoing shift toward staying private longer is “making it much harder for individuals to pursue that dream,” he adds.

It’s why the Securities and Exchange Commission under current chair Jay Clayton wants to make it easier for individuals like mom-and-pop investors to invest in private companies.

Whether Clayton gets his way remains an open question. If there’s any consolation in the meantime, it may be that mutual fund investors, including T. Rowe Price and Fidelity, have continued pouring more of their own assets into startups, recognizing that if they want alpha, the private market is where they’re going to find it. Private shares are still a small fraction of their assets, but for everyday investors who want access to more of the buzziest startups as they are coming up, it may have to suffice for now. 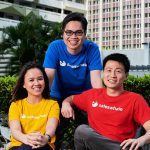