SugarCRM announced today that it has acquired Atlanta-based Salesfusion to help build out the the marketing automation side of its business. The deal closed last Friday. The companies did not share the purchase price.

CEO Craig Charlton, who joined the company in February, says he recognized that marketing automation was an area of the platform that badly needed enhancing. Faced with a build or buy decision, he decided it would be faster to buy a company and began looking for an acquisition target.

“We spent the last three or four months doing a fairly intensive market scan and dealing with a number of the possible opportunities, and we decided that Salesfusion was head and shoulders above the rest for a variety of reasons,” he told TechCrunch.

Among those was the fact the company was still growing and some of the targets Sugar looked at were actually shrinking in size. The real attraction for him was Salesfusion’s customer focus. “They have a very differentiated on-boarding process, which I hadn’t seen before. I think that’s one of the reasons why they get such a quick time to value for the customers is because they literally hold their hand for 12 weeks until they graduate from the on-boarding process. And when they graduate, they’re actually live with the product,” he said.

Brent Leary, principal at CRM Essentials, who is also based in Atlanta, thinks this firm could help Sugar by giving it a marketing automation story all its own. “Salesfusion gives Sugar a marketing automation piece they can fully bring into their fold and not have to be at the whims of marketing automation vendors, who end up not being the best fit as partners, whether it’s due to acquisition or instability of leadership at chosen partners,” Leary told TechCrunch.

It has been a period of transition for SugarCRM, which has had a hard time keeping up with giants in the industry, particularly Salesforce. The company dipped into the private equity market last summer and took a substantial investment from Accel-KKR, which several reports pegged as a 9 figure deal, and Pitchbook characterized as a leveraged buyout.

As part of that investment, the company replaced long-time CEO Larry Augustin with Charlton and began creating a plan to spend some of that money. In March, it bought email integration firm Collabspot, and Charlton says they aren’t finished yet with possibly two or three more acquisitions on target for this quarter alone.

“We’re looking to make some waves and grow very aggressively and and to drive home some really compelling differentiation that we have, and and that will be building over the next 12 to 24 months,” he said.

Salesfusion, which was founded in 2007 and raised $32 million, will continue to operate out of its offices in Atlanta. The company’s 50 employees are now part of Sugar. 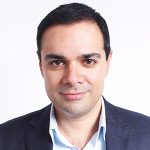