As Amazon looks to increasingly expand its cashier-less grocery stories — called Amazon Go – across different regions, there’s at least one startup hoping to end up everywhere else beyond Amazon’s empire.

Standard Cognition aims to help businesses create that kind of checkout experience based on machine vision, using image recognition to figure out that a specific person is picking up and walking out the door with a bag of Cheetos. The company said it’s raised an additional $5.5 million in a round in what the company is calling a seed round extension from CRV. The play here is, like many startups, to create something that a massive company is going after — like image recognition for cashier-less checkouts — for the long tail businesses rather than locking them into a single ecosystem.

Standard Cognition works with security cameras that have a bit more power than typical cameras to identify people that walk into a store. Those customers use an app, and the camera identifies everything they are carrying and bills them as they exit the store. The company has said it works to anonymize that data, so there isn’t any kind of product tracking that might chase you around the Internet that you might find on other platforms.

“The platform is built at this point – we are now focused on releasing the platform to each retail partner that signs on with us,” Michael Suswal, Co-founder and COO said. “Most of the surprises coming our way come from learning about how each retailer prefers to run their operations and store experiences. They are all a little different and require us to be flexible with how we deploy.”

It’s a toolkit that makes sense for both larger and smaller retailers, especially as the actual technology to install cameras or other devices that can get high-quality video or have more processing power goes down over time. Baking that into smaller retailers or mom-and-pop stores could help them get more foot traffic or make it easier to keep tabs on what kind of inventory is most popular or selling out more quickly. It offers an opportunity to have an added layer of data about how their store works, which could be increasingly important over time as something like Amazon looks to start taking over the grocery experience with stores like Amazon Go or its massive acquisition of Whole Foods.

“While we save no personal data in the cloud, and the system is built for privacy (no facial recognition among other safety features that come with being a non-cloud solution), we do use the internet for a couple of things,” Suswal said. “One of those things is to update our models and push them fleet wide. This is not a data push. It is light and allows us to make updates to models and add new features. We refer to it as the Tesla model, inspired by the way a driver can have a new feature when they wake up in the morning. We are also able to offer cross-store analytics to the retailer using the cloud, but no personal data is ever stored there.”

It’s thanks to advances in machine learning — and the frameworks and hardware that support it — that have made this kind of technology easier to build for smaller companies. Already there are other companies that look to be third-party providers for popular applications like voice recognition (think SoundHound) or machine vision (think Clarifai). All of those aim to be an option outside of whatever options larger companies might have like Alexa. It also means there is probably going to be a land grab and that there will be other interpretations of what the cashier-less checkout experience looks like, but Standard Cognition is hoping it’ll be able to get into enough stores to be an actual challenger to Amazon Go. 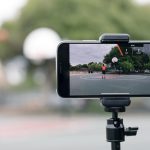