SparkLabs Group, the network of accelerators and venture funds that has now worked with more than 200 startups around the world, wants to foster the next generation of entrepreneurs with a new program for universities. Called SparkLabs Frontier, the program’s first accelerator will launch at Arizona State University this summer.

SparkLabs Frontier-ASU is open to participants from the university’s programs, including the Ira A. Fulton Schools of Engineering, W.P. Carey School of Business and the Thunderbird School of Global Management, as well as alumni. It will begin taking applications on May 13, with the accelerator program starting in July 2019.

Unlike SparkLabs’ other accelerators, SparkLabs Frontier-ASU will have a three to four-month-long pre-accelerator component with training (provided in partnership with the Global Scaling Academy) to help students and other potential applicants develop startup ideas and connect with possible co-founders This is intended to ready them to apply for the main accelerator program, which will accept six to eight startups at a time. SparkLabs Frontier-ASU also entails the creation of a 30 percent stock option versus the standard 10 to 20 percent for seed-stage startups.

In an email, SparkLabs Group co-founder Frank Meehan said that the network wanted to work with ASU because of its achievements under university president Michael Crow (who as Columbia University executive vice provost taught another SparkLabs co-founder, Bernard Moon).

“ASU has grown into the most innovative school in the U.S., risen quickly up the national research rankings, leading a deep-space NASA mission for the first time and has heavily integrated entrepreneurship throughout its campus and schools,” he said. With Arizona’s relationship to the automotive and space industries, SparkLabs Frontier-ASU will focus on the “broad arena of frontier tech, or deep tech as some call it,” Meehan added. “So we will be looking into AI, autonomous driving, materials science, space, augmented reality, genomics, drones and other cutting-edge areas of innovation.”

While SparkLabs’ recent classes in other accelerators are now more often attracting later stage seed or Series A companies, SparkLabs Frontier-ASU will “be more raw, early and bootstrapped,” said Meehan. “The pre-accelerator program will be to develop ideas, talent and teams, so we don’t even expect these individuals to have co-founders or colleagues at this stage.”

SparkLabs Frontier has also began discussions with major research universities in the U.S., China and South Korea for future programs.

In a prepared statement, ASU president Michael Crow said “Entrepreneurial for ASU means partnerships and alliances, and it means driving ideas, technologies and inventions that matter, that will have real impact. Partnerships like this one with SparkLabs Group will move innovation and entrepreneurialism forward, which is necessary for the continuation of the success of the state, the country and the world.” 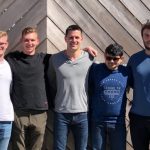