Sonos prices its IPO to raise as much as $105M

Sonos today took the next step in its initial public offering price, setting a range for the shares it intends to sell that will help calibrate the final amount of money – and valuation — that it will have when it begins its trading debut.

This isn’t the final, final step in the IPO process as this is usually done to test the waters and figure out the exact appetite for the company’s shares when it goes public. Sonos is offering 5,555,555 (a wonderful palindrome of a number) shares, where it will raise as much as $105 million if it prices on the upper end of its range and sells them at $19 per share. The official range is between $17 and $19, but this can go up and down throughout the process — with a drop-off signaling a lack of interest or skepticism, and an increased range a sign of heavy demand. Companies will sometimes lowball their range, though we won’t find out for a little bit where everything lands.

Insiders are also selling 8,333,333 million shares in this initial public offering. Including that, the IPO could end up raising around $250 at the middle of that $17 to $19 range that it’s estimating including the shares sold by existing stockholders.

The company is offering some preliminary estimates for its second quarter, saying it generated between $206.4 million and $208.4 million in revenue with a net loss of between $29 million and $27.1 million (this is probably because the final accounting isn’t finished up as we’re just about entering the front end for earnings season for major companies). The company said it sold between 880,000 and 890,000 products as an estimated range in the second quarter this year, up from 796,000 products in the second quarter last year.

Sonos is nicely positioned as a third-party option in an ecosystem that’s getting increasingly crowded by proprietary speakers from the larger companies that own voice assistants like the Echo, HomePod, and Google Home. But Sonos has been around for a considerable amount of time and has clearly built up a significant following to ensure that it could find itself operating as an independent public company. In its fiscal 2017 year, Sonos said it brought in nearly $1 billion in revenue, an increase of 10% year-over-year. The initial filing indicated that the company had sold a total of 19 million products in 6.9 million households, with customers listening to 70 hours of content each month.

This is basically the next step in the process as the company continues its march toward making its debut, and we’ll get more details soon enough as to whether or not investors are interested in a publicly-traded company that’s known for its speakers. 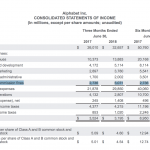