Singapore is keen to exert itself as an epicenter for startups and tech worldwide. But beyond the government-backed startup programs, which include grants, investment checks and more, a key point is simply making it easy for companies to set up shop in the country.

Southeast Asia is highly-touted as a growth region for startups, with its ‘internet economy’ forecast to triple between now and 2025, and Singapore is the most obvious anchor for the region. Neighboring countries like Indonesia, Thailand and Vietnam may have larger economies and populations, but bureaucracy can be arduous. In comparison, Singapore has digitized the process of incorporating and managing a business based there. More than just its local region, Singapore wants to be a global hub for companies.

Perhaps the best sign of that potential is that startups of its own are stepping up to help founders from any corner of the world register in Singapore, one of which includes Sleek. The company was founded in Singapore in May 2017 by French entrepreneurs Julien Labruyere and Adrien Barthel, who grew frustrated at the pedestrian speed of traditional corporate secretaries and accounting firms and their paperwork.

By contrast, Sleek is paperless. The idea is a one-stop-shop for registering a business in Singapore, so that means handling everything from incorporation, government, accounting and taxes, visas and regulatory compliance.

For SG$800 ($585) per year, Sleek will take on the role of compliance officer, with more expensive packages for nominee director, registered address, employee pass applications and more. Taxes and other costs are, of course, not included but the processes to handle them are offered on a pay-per-use basis.

Barthel — whose past roles including Luxola when it was acquired by Sephora — told TechCrunch that there’s still a significant paper trail, despite the digitization of many corporation processes in Singapore, but Sleek has made its own systems to cover that for now.

“As we receive mail every day for hundreds of companies, we have developed an AI that analyzes all the mail we receive for our clients, and that dispatches the documents in the right client cloud mailbox,” he said. That’s in addition to a workflow management tool. 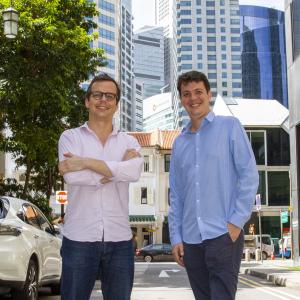 Sleek has grown to over 50 people and it claims to work with over 1,000 clients, ranging from one-person consultancies to MNC sub-divisions and local startups. It is also a partner of Xero, which lists it as a ‘gold’ level partner — that’s ahead of better-known rivals including accounting’s Big Four, KPMG, EY, Deloitte and PwC.

The startup is now looking to push on after it raised an undisclosed round of investment that included participation from Martin Crawford, the former CEO of corporate services giant Vistra.

Hong Kong-based Vistra offers a range of services, including incorporation, across 78 offices worldwide and Bartel is excited at the potential to bring Crawford’s experience on board.

“His 25 years in our industry, serving hundred thousands of clients across 52 jurisdictions, made him realize that only technology could help tap this vast opportunity,” he said in an interview.

Members of the Sleek team outside its office in Singapore

Coming up in the future will be partnerships with other companies that can add new services that complement the work of Sleek. That platform-like approach, Barthel said, will include new projects from third-parties around financial services, more granular accounting controls and more. There are also plans to launch a similar service for incorporation in Hong Kong soon.

“What excites us is that we help entrepreneurs and SMEs at the very inception of their journey, assisting them in the good and the more challenging times,” Barthel said.

Sleek is far from the only player in the digital incorporation space. Aside from the aforementioned Big Four and Vistra, Singapore is home to other newer entrants. Those include Lanturn — another Xero partner — Osome and Bluemeg, each of which has arrived since Sleek’s foundation to add more competition.

Bathel said he welcomes the competition as a validation of “changing habits,” and particularly demand for “a new user experience that’s up to date with digital tools and no longer hardcopies to send across the world.”

As for why he believes Sleek has the edge on its rivals? He puts that down to its outsider status, which has helped understand the pain of the traditional system in a very personal way.

“We were frustrated clients who decided to build an alternative fitting our needs,” he explained.