Slack, the ubiquitous workplace messaging tool, will make its pitch to prospective shareholders on Monday at an invite-only event in New York City, the company confirmed in a blog post on Wednesday. Slack stock is expected to begin trading on the New York Stock Exchange as soon as next month.

Slack, which is pursuing a direct listing, will live stream Monday’s Investor Day on its website.

An alternative to an initial public offering, direct listings allow businesses to forgo issuing new shares and instead sell directly to the market existing shares held by insiders, employees and investors. Slack, like Spotify, has been able to bypass the traditional roadshow process expected of an IPO-ready business, as well as some of the exorbitant Wall Street fees.

Spotify, if you remember, similarly live streamed an event that is typically for investors eyes only. If Slack’s event is anything like the music streaming giant’s, Slack co-founder and chief executive officer Stewart Butterfield will speak to the company’s greater mission alongside several other executives.

Slack unveiled documents for a public listing two weeks ago. In its SEC filing, the company disclosed a net loss of $138.9 million and revenue of $400.6 million in the fiscal year ending January 31, 2019. That’s compared to a loss of $140.1 million on revenue of $220.5 million for the year before. 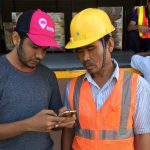