Rockset launches out of stealth with $21.5 M investment

Rockset, a startup that came out of stealth today, announced $21.5M in previous funding and the launch of its new data platform that is designed to simplify much of the processing to get to querying and application building faster.

As for the funding, it includes $3 million in seed money they got when they started the company, and a more recent $18.5 million Series A, which was led by Sequoia with participation from Greylock.

Company co-founder and CEO Venkat Venkataramani is a former Facebook engineer where he learned a bit about processing data at scale. He wanted to start a company that would help data scientists get to insights more quickly.

Data typically requires a lot of massaging before data scientists and developers can make use of it and Rockset has been designed to bypass much of that hard work that can take days, weeks or even months to complete.

“We’re building out our service with innovative architecture and unique capabilities that allows full-featured fast SQL directly on raw data. And we’re offering this as a service. So developers and data scientists can go from useful data in any shape, any form to useful applications in a matter of minutes. And it would take months today,” Venkataramani explained.

To do this you simply connect your data set wherever it lives to your AWS account and Rockset deals with the data ingestion, building the schema, cleaning the data, everything. It also makes sure you have the right amount of infrastructure to manage the level of data you are working with. In other words, it can potentially simplify highly complex data processing tasks to start working with the raw data almost immediately using SQL queries.

To achieve the speed, Venkataramani says they use a number of indexing techniques. “Our indexing technology essentially tries to bring the best of search engines and columnar databases into one. When we index the data, we build more than one type of index behind the scenes so that a wide spectrum of pre-processing can be automatically fast out of the box,” he said. That takes the burden of processing and building data pipelines off of the user.

The company was founded in 2016. Chen and Sequoia partners Mike Vernal joined the Rockset board under the terms of the Series A funding, which closed last August. 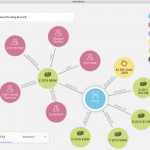