Revenue-based investing: A new option for founders who care about control

David Teten is a Venture Partner with HOF Capital. He was previously a Partner for 8 years with HOF Capital and ff Venture Capital. David writes regularly at teten.com and @dteten.
More posts by this contributor

Does the traditional VC financing model make sense for all companies? Absolutely not. VC Josh Kopelman makes the analogy of jet fuel vs. motorcycle fuel. VCs sell jet fuel which works well for jets; motorcycles are more common but need a different type of fuel.

A new wave of Revenue-Based Investors are emerging who are using creative investing structures with some of the upside of traditional VC, but some of the downside protection of debt. I’ve been a traditional equity VC for 8 years, and I’m now researching new business models in venture capital.

I believe that Revenue-Based Investing (“RBI”) VCs are on the forefront of what will become a major segment of the venture ecosystem. Though RBI will displace some traditional equity VC, its much bigger impact will be to expand the pool of capital available for early-stage entrepreneurs.

This guest post was written by David Teten, Venture Partner, HOF Capital. You can follow him at teten.com and @dteten. This is part of an ongoing series on Revenue-Based Investing VC that will hit on:

So what is Revenue-Based Investing?

RBI structures have been used for many years in natural resource exploration, entertainment, real estate, and pharmaceuticals. However, only recently have early-stage companies started to use this model at any scale.

According to Lighter Capital, “the RBI market has grown rapidly, contrasting sharply with a decrease in the number of early-stage angel and VC fundings”. Lighter Capital is a RBI VC which has provided over $100 million in growth capital to over 250 companies since 2012.

Lighter reports that from 2015 to 2018, the number of VC investments under $5m dropped 23% from 6,709 to 5,139. 2018 also had the fewest number of angel-led financing rounds since before 2010. However, many industry experts question the accuracy of early-stage market data, given many startups are no longer filing their Form Ds.

John Borchers, Co-founder and Managing Partner of Decathlon Capital, claims to be the largest revenue-based financing investor in the US. He said, “We estimate that annual RBI market activity has grown 10x in the last decade, from two dozen deals a year in 2010 to upwards of 200 new company fundings completed in 2018.” 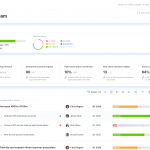