It’s often said that the dramatic fall of crypto prices last year ushered in a new era for technology-focused startups in the blockchain space, and the same argument can be made for the venture capitalists who fund them. Proof of Capital is the latest fund to emerge after it officially announced a maiden $50 million fund today.

The fund is led by trio Phil Chen, who created HTC’s Vive VR headset and is currently developing its Exodus blockchain phone (he spent time as a VC with Horizons Ventures in between), Edith Yeung, who previously headed up mobile for 500 Startups, and Chris McCann, a Thiel Fellow whose last role was head of community for U.S. VC firm Greylock Partners.

The firm — and you have to give them credit for the name — has an LP base that is anchored by HTC — no big surprise there given the connections — alongside YouTube co-founder Steve Chen, Taiwan-based Formosa Plastics, Ripple’s former chief risk officer Greg Kidd (who is also a prolific crypto investor) and a number of undisclosed family offices.

“For HTC, it’s obvious, they already have a product to go with it,” Yeung told TechCrunch in an interview, referencing the fact that HTC is keen to invest in blockchain services and startups to build an ecosystem for its play.

The fund also includes a partnership with HTC which, slightly hazy on paper, will essentially open the possibility for Proof of Capital portfolio companies to work with HTC directly to develop services or products for Exodus and potentially other HTC blockchain ventures. But other LPs are also keen to dip their toes in the water in different ways.

“Some of these backers are curious at the possibilities of blockchain,” continued Yeung. “For example, they’re giving us some ideas on how tokenization and gamification could be applied on different platforms.”

The fund itself is broadly targeted at early stage blockchain companies in fintech, infrastructure, hardware and the “consumer layers of the blockchain ecosystem.” Its remit is worldwide. Although Chen and Yeung have strong networks in Asia, the fund’s first deal is an investment in Latin America-based blockchain fintech startup Ubanx.

Yeung clarified that the fund is held in fiat currency and that it is focused on regular VC deals, as opposed to token-based investments.

“It’s a VC fund so the setup is traditional,” she explained. “There’s been a lot of interesting movements in the last two years, [but] we come from a more traditional VC background and are excited about the technology.”

“It’s still really early [for blockchain] and a lot of the hype — the boom and bust — is down to the crypto market and ICOs, but the reality is that a lot of these technologies are really nascent. Now, projects are raising equity, even if they have a token,” Yeung added.

Indeed, last year we wrote about the rise of private sales and that even the biggest blockchain companies took on VC funding — crypto didn’t kill VCs despite the hype — and Yeung said that blockchain startup founders in 2019 are “taking a more concerted approach” to raising money beyond simply issuing tokens.

“Many projects that raised ICO really smelt like equity,” said Yeung. “We are seeing companies today delaying token issuance as much as possible; the whole thing has gone a little more back to earth.”

HTC is an anchor LP in Proof of Capital, and it is working with the fund to help its portfolio companies develop services for its Exodus blockchain phone, pictured above 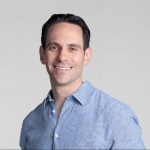