Pixeom, a startup that offers a software-defined edge computing platform to enterprises, today announced that it has raised a $15M funding round from Intel Capital, National Grid Partners and previous investor Samsung Catalyst Fund. The company plans to use the new funding to expands its go-to-market capacity and invest in product development.

If the Pixeom name sounds familiar, that may be because you remember it as a Raspberry Pie-based personal cloud platform. Indeed, that’s the service the company first launched back in 2014. It quickly pivoted to an enterprise model, though. As Pixeom CEO Sam Nagar told me, that pivot came about after a conversation the company had with Samsung about adopting its product for that company’s needs. In addition, it was also hard to find venture funding. The original Pixeom device allowed users to set up their own personal cloud storage and other applications at home. While there is surely a market for these devices, especially among privacy conscious tech enthusiasts, it’s not massive, especially as users became more comfortable with storing their data in the cloud. “One of the major drivers [for the pivot] was that it was actually very difficult to get VC funding in an industry where the market trends were all skewing towards the cloud,” Nagar told me.

At the time of its launch, Pixeom also based its technology on OpenStack, the massive open source project that helps enterprises manage their own data centers, which isn’t exactly known as a service that can easily be run on a single machine, let alone a low-powered one. Today, Pixeom uses containers to ship and manage its software on the edge.

What sets Pixeom apart from other edge computing platforms is that it can run on commodity hardware. There’s no need to buy a specific hardware configuration to run the software, unlike Microsoft’s Azure Stack or similar services. That makes it significantly more affordable to get started and allows potential customers to reuse some of their existing hardware investments.

Pixeom brands this capability as ‘software-defined edge computing’ and there is clearly a market for this kind of service. While the company hasn’t made a lot of waves in the press, more than a dozen Fortune 500 companies now use its services. With that, the company now has revenues in the double-digit millions and its software manages more than a million devices worldwide.

As is so often the case in the enterprise software world, these clients don’t want to be named, but Nagar tells me that they include one of the world’s largest fast food chains, for example, which uses the Pixeom platform in its stores.

On the software side, Pixeom is relatively cloud agnostic. One nifty feature of the platform is that it is API-compatible with Google Cloud Platform, AWS and Azure and offers an extensive subset of those platforms’ core storage and compute services, including a set of machine learning tools. Pixeom’s implementation may be different, but for an app, the edge endpoint on a Pixeom machine reacts the same way as its equivalent endpoint on AWS, for example.

Until now, Pixeom mostly financed its expansion — and the salary of its over 90 employees — from its revenue. It only took a small funding round when it first launched the original device (together with a Kickstarter campaign). Technically, this new funding round is part of this, so depending on how you want to look at this, we’re either talking about a very large seed round or a Series A round. 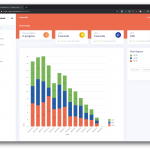