Pinterest, the nearly decade-old visual search engine, has unveiled its S-1 as it prepares for an initial public offering expected in April.

Valued at $12.3 billion in 2017, Pinterest took its first official step toward a 2019 IPO two months ago, hiring Goldman Sachs and JPMorgan Chase as lead underwriters for its NYSE offering. Now it’s giving us a closer look at its financials. 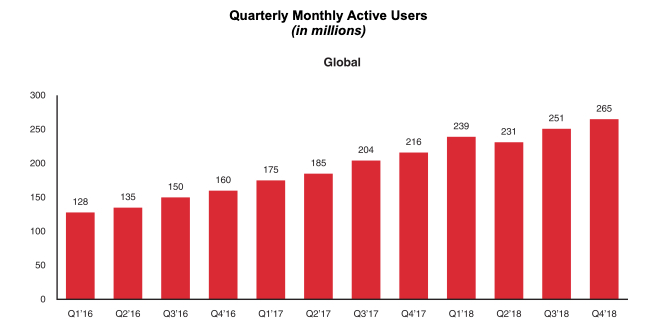 Pinterest has similarly raised around $1.5 billion from VCs, listing both early- and late-stage investors on its cap table. The company’s key stakeholders include Bessemer Venture Partners, FirstMark Capital, Andreessen Horowitz, Fidelity and Valiant Capital Partners, though the filing doesn’t state the percent ownership of each of these entities.

Pinterest counts more than 250 million monthly active users, bringing in some $700 million in ad revenue in 2018, per reports, a 50 percent increase year-over-year. The business employs 1,600 people across 13 cities, including Chicago, London, Paris, São Paulo, Berlin and Tokyo. Per the filing, Pinterest has signed a lease for a brand new San Francisco headquarters, which will be constructed near its current HQ.

Pinterest emerged in 2010 as a buzzy social media startup and mobile app meant for sharing inspirational images and quotes. Under the leadership of co-founder and chief executive officer Ben Silbermann, it’s expanded over the years as it’s attempted to monetize the platform, which relies on ad revenue to stay afloat. Last fall, in a bid to turn more of its users into shoppers and compete with Instagram, the company rebuilt the infrastructure behind its product pins. The update brought up-to-date pricing and stock information on all product pins to the app, a new “Products like this” category under each fashion and home decor pin, and other user-friendly tweaks.

Pinterest’s IPO paperwork emerged just hours after another tech unicorn, Zoom, filed to go public, too. Several billion-dollar tech companies have made the choice to IPO in 2019, even after a weeks-long government shutdown caused a significant delay in IPOs. Pinterest follows Lyft, which unveiled its S-1 and nearly $1 billion in 2018 losses just three weeks ago. Uber and Slack are both expected to make their IPO paperwork available to the public soon.

Pinterest may be looking to benefit of the IPO hype spearheaded by Uber and Lyft though The Information has previously reported the offering could suffer because it’s a social media business, which means it is often compared to the likes of Facebook and Twitter, a pair of companies that have repeatedly raised concerns about user privacy.

This story is updating.