The New York Stock Exchange filed paperwork this morning with the U.S. Securities and Exchange Commission to allow companies to raise capital as part of a direct listing.

Direct listings are a way for companies to go public by selling existing shares held by insiders, employees and investors directly to the market, rather than the traditional method of issuing new shares. Direct listings have become increasingly popular since Spotify’s 2018 exit, which allowed its employees immediate liquidity, removed preferred access from bankers and allowed for market-driven price discovery. Companies, like Spotify, that opt to complete a direct listing are able to bypass the financial roadshow, thus avoiding some of Wall Street’s exorbitant fees. Historically, however, these companies have not been able to raise fresh capital as part of the process.

The NYSE’s new proposal seeks to change that. Specifically, the stock exchange plans to amend Chapter One of the Listed Company Manual, which outlines the NYSE’s initial listing requirements for companies completing initial public offerings or direct listings. If the amendment is approved—the NYSE is subject to the regulatory oversight of the SEC—companies going public on the NYSE will be permitted to raise capital through a direct listing.

The proposed hybrid model is likely to appeal to Silicon Valley tech startups, who’ve grown more familiar with the innovate route to the public markets following Spotify and Slack’s direct listings. On the backs of these exits, tech industry leaders have touted direct listings as the latest and greatest path to the public markets. Venture capitalist Bill Gurley, in particular, has encouraged companies to consider the method. Meanwhile Silicon Valley darling Airbnb, which has stated its intent to go public in 2020, is said to be considering a direct listing rather than a traditional IPO.

Gurley, who has expressed his discontent with bankers’ inability to adequately price IPOs, recently hosted a one-day conference focused on direct listings titled Direct Listings: A Simpler and Superior Alternative to the IPO. The event was attended by members of tech’s elite, including Sequoia Capital’s Mike Moritz and Spotify chief financial officer Barry McCarthy .

“Most people are afraid of backlash from the banks so they don’t speak out,” Gurley told CNBC earlier this year of his decision to publicly advocate for direct listings. “I’m at a point in my career where I can handle the heat.” 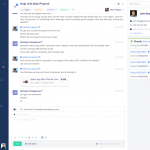