Normative, a startup that lets companies automate their carbon reporting — and in turn help them decrease their environmental footprint — has picked up $2.1 million in seed funding.

The modest injection of capital will be used by Normative to “accelerate growth” and expand to key markets in the EU and the U.S.

Billed as wanting to become the “Quickbook of carbon reporting,” Normative is a SaaS that plugs into various data — both a company’s internal systems and external databases on the environmental impact of good and services. It then automatically calculates carbon usage and emissions for reporting purposes, which is traditionally a time consuming and costly process. Existing clients include Summa Equity, Bonava and Ikano.

“It is widely recognized that corporate activities are by far the largest contributor to climate change,” Normative co-founder and CEO Kristian Rönn tells TechCrunch. “To use my own country as a case study, H&M, Ericsson and Electrolux reportedly have larger CO2 emissions than the entire population of Sweden put together. This highlights the reality that in order to mitigate climate change, large companies need to mitigate their emissions”.

However, Rönn says that the first step to mitigating climate change is for companies to measure their climate impact, but only around 5,000 companies of an estimated 200 million companies are thought to measure sustainability at all. To make matters worse, even when carbon emissions are measured, companies typically only include emissions that are easy to track, such as electricity and car fuel consumption, which is estimated to be less than 10% of total company emissions. Missing in much of the data is supply chain emissions, transport, travel, and the production of goods and services.

Which, of course, is where Normative steps in.

“Normative helps large companies to go from mapping 10% of their CO2 to mapping 100% of their emissions for every product, service and activity, by reading data directly from their existing business systems e.g. SAP, Oracle, Microsoft, Visma etc.,” explains Rönn. “Moreover, sustainability reporting has been completely inaccessible for the small enterprise segment (who would afford to pay $50k-200k per year?), but Normative makes the whole process 10x times cheaper”. 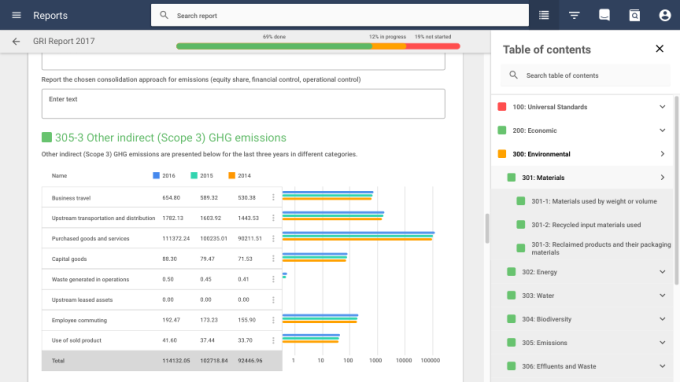 The timing looks good, too. With movements like Extinction Rebellion and a regulatory, shareholder and consumer push for companies to improve their environmental footprint, carbon reporting is becoming more mandatory. In Europe this includes an EU directive stipulating that all large public companies with more than 500 employees must “disclose certain information on the way they operate and manage social and environmental challenges”. Rönn says similar laws are underway also in the U.S.

Adds the Normative co-founder: “Sustainability reporting is a pain and a huge cost in time and money. However, more and more stakeholders — everything from investors to consumers as well as the legislative sector — demands transparency about companies’ unpaid externalities. Recently many large investors have signed the UN PRI, saying that they will look at sustainability data and comprehensive reporting when they invest”.