More evidence has emerged that the e-scooter sharing market faces a bumpy ride, as news circulates that authorities in Madrid have revoked licenses for all three operators in the city.

Lime, Wind and Voi, are being given a maximum of 72 hours to remove scooters from the city’s streets, whilst I understand it follows a recent change in mobility laws in Madrid that stipulate where and at what speed e-scooters can be driven.

Specifically, e-scooters can only operate in designated bike lanes and on only roads that have a speed limit below 30 kilometres per hour. Sidewalk and pedestrian areas were also recently banned following Spain’s first death from an e-scooter accident in August.

Meanwhile, my sources in Madrid tell me a meeting has just taken place between the city’s transport authorities to presumably find a resolution for the conflict. What the outcome of those talks are isn’t yet known, although the path to compliance may actually be relatively simple.

Lime, Wind and Voi will almost certainly need to make changes to their respective apps, which could include geo-fencing where the e-scooters can be ridden, as well as communicating those restrictions to users and legally enforcing them via their terms of service. In other words, this may yet prove to be little more than a speed bump in the current e-scooter race, which is frenzied to say the least.

Asked to comment on the situation in Madrid, Voi — which has made a virtue out of its ability to work with local governments and transport authorities — issued the following statement:

Voi is working closely with the authorities in Madrid to make sure that our app complies fully with the city’s new guidelines. We are confident that we will be able to get our scooters back on the streets of Madrid in a short time, to help residents and visitors travel around the city quickly and safely, in an environmentally-friendly, low-impact way.

I’ve also reached out to Lime and Wind and will update this article if and when I hear back. 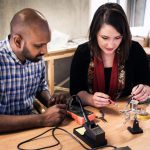