Stash, the fintech startup and app that aims to introduce new people to the world of investing, is unveiling some interesting new services while also announcing that it has raised more funding to expand its business. The company is introducing mobile-based banking accounts from Green Dot Bank; and alongside it, a new rewards program it is called “Stock-Back”: when users spend money using their Stash accounts, they get “points” — which are either stocks in the companies where they are buying goods, or shares in ETFs approved by Stash. On top of that, Stash also said that it raised a Series E of $65 million that it will be using to grow its business on the back of these two launches.

A spokesperson for the company said that Stash is not disclosing the full round of investors in this round, which is coming in “much higher” than $400 million, a source says. For context, Stash was valued at $350 million post-money in its Series D, according to figures from PitchBook, which would have, as a baseline, put this round at $405 million.

But from the looks of it, the $65 million appears to include participation from Breyer Capital, a previous investor whose founder Jim Breyer has heartily endorsed the new Stock-Back service and accompanying loyalty program that’s tied in with it, which was tested early with companies like Netflix, T-Mobile and Chipotle all offering stock when people used their Stash accounts to pay for goods and services at the companies.

“I have invested in and served on the Board of many leading companies, and it’s clear how a program like Stock-Back can power immense brand loyalty,” he said in a statement. “The early data shows unequivocally that share ownership drives increased sales and customer appreciation. This innovative new technology from STASH will have CEOs and CMOs knocking on their door.”

From what we understand, the round was led by a private institutional investor and includes 40 percent existing and 60 percent returning investors. Previous backers in addition to Breyer include Union Square Ventures, Coatue Management, Entree, Goodwater and Valar. “We’re really excited and proud to be working with this incredible group of VCs,” the spokesperson noted.

The Green Dot-powered banking service comes with the core features that will sound familiar to those who have used or looked at next-generation banking services before. It will include a debit-card based account, no overdraft or monthly maintenance fees, access to a network of ATMs that can be used for free, direct deposit services, as well as “personal guidance” for their financial planning activities, from saving to investing.

Stash is part of a wave of fintech startups — others include the likes of Robinhood, Acorns, YieldStreet, Revolut, and many others — that have tapped into the popularity of apps and the advent of new financial services technology to democratise how individuals can save, spend, invest, borrow and lend money, moving many of those operations and transactions out of the hands of the big incumbent players who used to control them.

The average age of a Stash user is 29 and average income is under $50,000 per year, and tying in transactions made using Stash’s banking service — by way of reward points that are being picked up incidentally — will make it even more seamless for these users to take some of their money and invest with it, while at the same time demystifying some of the process and making it more likely that those users will choose to invest even more down the line.

The idea of tying investments to what you are actually purchasing is a clever one. For a startup whose user base includes no-nonsense professionals from fields like teaching, nursing, and retail, this is the embodiment of putting your money where your mouth is — literally speaking, since the investments can include things like shares in Chipotle each time you buy food there; and T-Mobile every time you pay your phone bill for all the talking you do.

Stash is layering the stock incentive with what sounds like an interesting tie-in with rewards and loyalty services as well, with discounts on goods as high as five percent in some cases.

“80% of Americans are living paycheck-to-paycheck. Stock-Back is our way of utilizing STASH’s smart, patent-pending technology to help people build better financial habits and invest in their future,” said cofounder and president, Ed Robinson, in a statement. “Our ability to give customers the opportunity to save and build portfolios that mirror their spending behavior and preferences is incredibly powerful.” 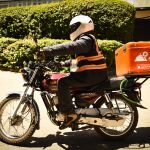