It’s been a year for on-demand services in India. Drivezy today became the latest to refuel after it raised a $20 million Series B.

The round was led by existing investor Das Capital, with participation from automotive giant Yamaha, Axan Partners and IT-Farm. The deal takes Drivezy, which was formerly known as JustRide, to $31 million raised to date. In addition, the startup has also inked a $100 million asset financing deal backed by Japan’s AnyPay, which will see new cars and motorbikes added to Drivezy’s fleet over the next year.

Drivezy — which graduated Y Combinator and Google’s Launchpad Accelerator program — claims to have a fleet of around 8,000 vehicles that includes 5,000 two-wheelers (motorbikes and scooters) and 3,000 cars. That attracts around 37,000 customers every month. Abhishek Mahajan, one of the company’s five co-founders, told TechCrunch in an interview that the fleet should add a further 50,000-60,000 new vehicles, 75 percent of which would be two-wheelers, thanks to the AnyPay deal.

Mahajan said that Drivezy is currently market leader when it comes to self-drive two-wheelers — “self-drive” meaning vehicles that can be rented for a trip — with motorbikes and scooters accounting for “the bulk” of transactions, but just 20 percent of revenue. (That’s opposed to 80 percent for cars.) Revenue itself is 25 percent of the cut of a rental.

Aside from the asset financing deal — which will see AnyPay’s Harbourfront Capital vehicle own the new assets — Drivezy uses peer-to-peer and dealership partners for its fleet. The peer-to-peer appeal centers around increasing the utility of vehicles (and providing additional income to owners); that’s a similar pitch to car dealerships, who can draw income from vehicles used on Drivezy that would otherwise sit idle waiting to be purchased.

But the AnyPay deal is a “game changer,” according to Mahajan.

“When we fast-forward five years, we can’t imagine a scenario that car ownership in India goes from eight percent [right now] to U.S. level of 80 percent. India will have to skip a cycle on the culture of ownership and move into a sustainable sharing of cars model,” he added.

Drivezy isn’t alone in believing that future. The company’s main rivals include Revv, which raised $14.3 million led by Hyundai this year, and Zoomcar, which has raised $100 million from investors that include Ford and India’s Mahindra & Mahindra. With Yamaha jumping aboard with Drivezy, India’s on-demand rentals market has three automotive firms in the race.

For now, there’s no plan to move overseas, but Mahajan said that markets like Southeast Asia could become expansion targets in the future, once the India business is more developed. 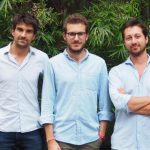