Headquartered in New York City with offices in Seoul and Tokyo, Noom is best known for its direct-to-consumer weight loss app, but it also develops enterprise products, including an app focused on diabetes and hypertension. Noom’s consumer app competes for users with Under Armour’s MyFitnessPal and Weight Watchers, but its closest rival is probably nutrition and weight loss app Rise because both offer personalized programs and coaching for a subscription fee.

Noom aims to set itself apart by focusing on long-term lifestyle and behavior changes, in addition to calorie, nutrition and exercise tracking. Users get access to 1:1 coaching and fitness programs personalized by an algorithm based on how they answer a questionnaire.

The company will use its new funding to hire more people for product development. In a press statement, Koum said he invested in Noom because it “has many of the same traits that helped WhatsApp disrupt the communications industry. Noom is so far ahead of the competition when it comes to technology, execution and brand recognition that it will be difficult for any company to catch up.” 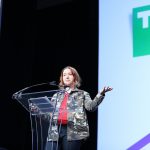