Grab’s fundraising push continues unabated after the Southeast Asian ride-hailing firm announced that it has raised $200 million from Central Group, a retail conglomerate based in Thailand.

Central’s business covers restaurants, hotels and more than 30 malls in Thailand, while it has operations in markets that include Vietnam and Indonesia. Its public-listed holding companies alone are worth more than $15 billion.

Singapore-based Grab confirmed that this deal is not part of its ongoing Series H fundraising, but is instead an investment into its Thailand-based business. Rumors of the deal were first reported by Reuters last year.

Following this investment, Central said it will work with Grab in a number of areas in Thailand, including bringing its restaurants into the Grab Food service, adding Grab transportation to its physical outlets and bringing Grab’s logistics service into its businesses.

The investment represents the first time an investor has bought into a local Grab country unit, and the goal is to strengthen Grab’s position in Thailand — a market with 70 million consumers and Southeast Asia’s second-largest economy. Grab is under threat from Go-Jek, which expanded to Thailand at the end of 2018. While Go-Jek’s ‘Get’ service is currently limited to motorbikes on-demand in Thailand, its ambition is to recreate its Indonesia-based business that covers four-wheeled cars, mobile payments, on-demand services and more.

Central is a huge presence in the country, and in recent years it has raised its efforts to translate that offline retail presence into the digital space. Past deals have included the acquisition of Rocket Internet’s Zalora fashion business in 2016, and — more recently — a $500 million joint venture with Chinese e-commerce firm JD.com to create online retail and fintech businesses in Thailand.

Grab, meanwhile, is pushing on with its $3 billion Series H funding round. That deal is anchored by a $1 billion investment from Toyota but it also includes contributions from the likes of Microsoft, Booking Holdings and Yamaha Motors. More capital is waiting in the wings, however, with existing investor SoftBank in the process of transferring its investment to its Vision Fund with a view to investing a further $1.5 billion. The total fundraising effort is targeted at a lofty goal of $5 billion, sources told TechCrunch.

To date, Grab has raised $6.8 billion from investors, according to data from Crunchbase. That makes it Southeast Asia’s most capitalized tech startup and it was most recently valued at $11 billion. The company recently announced it has completed three billion rides; it claims 130 million downloads across its eight markets.

Go-Jek, meanwhile, closed the first portion of a $2 billion funding round last week, sources told TechCrunch. The new financing is aimed at growing out its presence in new market expansions which, beyond Thailand, include Singapore, Vietnam and the Philippines. 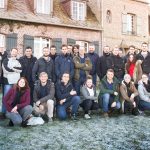