Shortly after closing a $100 million pre-IPO round, food delivery business Postmates has confidentially filed documents with the Securities and Exchange Commission for an upcoming public offering, Bloomberg is reporting.

We’ve reached out to Postmates for confirmation.

The company will debut on the stock exchange at a more than $1.85 billion valuation — the valuation it garnered with its $100 million in January. In total, Postmates has raised $681 million in venture capital funding from investors including Spark Capital, Founders Fund, Uncork Capital and Slow Ventures.

The 8-year-old company has tapped JPMorgan Chase and Bank of America to lead its upcoming float.

Postmates, which competes with several large players in the food delivery space including Uber Eats and DoorDash, say it completes 5 million deliveries per month and is reportedly expected to record $400 million in revenue in 2018 on food sales of $1.2 billion.

Currently, it operates in more than 550 cities, recently tacking on another 100 markets to reach an additional 50 million customers.

Postmates is next in a long line of tech unicorns planning to make the leap into the public markets in 2019. Slack most recently filed confidentially to exit, following Lyft and Uber, which similarly submitted private SEC documents at the tail-end of 2018. 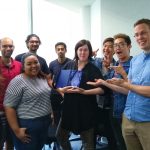