Datacoral raises $10M Series A for its data infrastructure service

Datacoral aims to make it easier for enterprises to build data products by abstracting away all of the complex infrastructure to organize and process data. The company today announced that it has raised a $10 million Series A financing round led by Madrona Venture Group, with participation from Social Captial, which also led its $4 million seed round in 2017.

Datacoral CEO Raghu Murthy tells me that the company plans to use the new funding to grow its business team in order to be able to reach more potential customers and to expand its engineering team as well.

The promise of Datacoral is to offer enterprises an end-to-end data infrastructure that will allow businesses and their data scientists to focus on generating insights over having to manage and integrate their data sources. Since nobody wants to move large amounts of data between clouds — and take the performance hit that comes with that — Datacoral sits right inside a company’s AWS systems. It’s still a fully managed service, though, but the data is encrypted and never leaves a customer’s virtual private cloud.

“As companies look to their data to deliver value – data practitioners are finding that configuring and managing their own data infrastructure is a time-consuming job that is expensive and fraught with errors,” said Murthy. “We have built a platform that easily and automatically brings together data from different applications and databases, organizes that data in any query engine and acts on insights that are critical to running their business. A crucial component is that it works securely and privately within the customer’s cloud, instead of us ingesting data from their systems.”

Murthy was an early engineer at Facebook and part of the team that was in charge of scaling that company’s data infrastructure and ran a part of the engineering team at Bebop, Diane Greene’s startup that was later acquired by Google.

To scale Datacoral, the team is betting on a serverless platform itself. It’s making extensive use of AWS Lambda and other PaaS solutions on Amazon’s cloud computing platform. That doesn’t mean Datacoral plans to only support AWS, though. Murthy tells me that Azure support is next. “We plan to work across all of the top cloud providers by leveraging their unique services and provide a consistent ‘data-centric interface’ to our customers — essentially be ‘cloud best’ instead of ‘cloud agnostic.’” 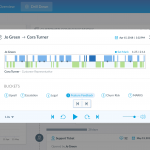