Founded in 2011, DoubleDutch created both mobile and web apps that gave event hosts everything they needed to set up and monitor the success of their events through a white-labeled solution they could customize to their own needs. The overall platform included event registration technology, the event content management system to manage an event’s entire program, and the event app for the attendees.

To date, DoubleDutch had raised nearly $80 million in funding according to CrunchBase, from investors including KKR, Bessemer Venture Partners, Index Ventures, Bullpen Capital, Enspire Capital, Mithril Capital Management, and others.

The company saw some upsets in more recent years as it struggled towards profitability. It laid off 25% of its workforce in 2016, then laid off another 40% of staff the following year, including its CFO, CCO, VP of Customer Success and others. Also in 2017, DoubleDutch replaced CEO Bryan Parker as CEO after only two months on the job after being appointed to the position from his earlier role as COO. DoubleDutch founder Lawrence Coburn took the CEO role instead.

However, in March 2018, DoubleDutch announced it had finally become cash-flow positive. At the same time, it announced new funding from existing investors KKR, Bessemer Venture Partners, and Bullpen Ventures and that it had completed the acquisition of Eventgrid, an events platform used by Adobe, Dropbox, Sony, and others.

According to DoubleDutch, joining Cvent made sense as both “share a passion for delivering innovative technology solutions for event organizers, including world-class mobile event apps.”

“DoubleDutch is an innovator in the mobile event app space and both Cvent and DoubleDutch have a shared mission to unlock the business value of human connection,” said Lawrence Coburn, CEO and founder of DoubleDutch, in a statement. “We are incredibly proud to join the market-leading team at Cvent. With their global reach and scale, we can fuel our passion to change the way people connect, learn, and grow at live events.”

Coburn is expected to depart following the acquisition, according to a report from Skift. DoubleDutch’s other co-founder, Pankaj Prasad, had left in November 2017 to join Salesforce.

The company stressed that existing customers would see no disruption in their service or with their upcoming events — likely a big concern for those who relied on the platform, given how complex setting up and managing events can be. Customers were also invited to Cvent’s Connect User Conference in July in Las Vegas where they could learn more about Cvent’s full suite of solutions.

Cvent, meanwhile, sees the addition of DoubleDutch as a further investment in the onsite experience for events.

“We are extremely excited to add DoubleDutch to the Cvent family,” said Cvent founder and CEO Reggie Aggarwal, added. “By adding DoubleDutch’s industry expertise to Cvent, we accelerate our investment in mobile event technology. We are also proud to welcome the talented DoubleDutch team to our more than 4,000 Cventers worldwide. Together, we will continue to drive innovation in how attendees engage at events.”

Cvent itself was acquired by Vista Equity Partners in 2016 for $1.65 billion, and ceased to trade on the NYSE on November 29, 2016. As both it and DoubleDutch are private companies, they declined to comment on the deal terms or price beyond their press releases.

Cvent tells TechCrunch its interest in DoubleDutch was for three main reasons: the product, people and the customers — the factors that drive all its acquisition decisions. Over the years, the company has picked up several other businesses, including Wedding Spot, Alliance Tech, Social Tables, and others. It also merged with Lanyon a few years ago. Cvent owns other event apps including CrowdCompass and QuickMobile, as well.

The company tells us it’s still working through how it will integrate DoubleDutch into its global organization, and can’t comment on specific positions or rolls at this time. 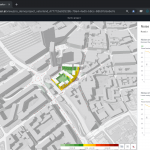