Cleo, the London-based “digital assistant” that wants to replace your banking apps, has quietly taken venture debt from U.S.-based Triplepoint Capital, according to a regulatory filing.

The amount remains undisclosed, though I understand from sources that the figure is somewhere in the region of mid-“single digit” millions and will bridge the gap before a larger Series B round later this year. Cleo declined to comment on the fundraising.

However, sources tell me that the need to raise debt financing is partly related to Cleo Plus, the startup’s stealthy premium offering that is currently being tested and set to launch more widely soon. The new product offers Cleo users a range of perks, including rewards and an optional £100 cash advance as an alternative to using your bank’s overdraft facility. The credit facility is, for the time bring at least, being financed from the startup’s own balance sheet, hence the need for additional capital.

The new funding also relates to Cleo’s U.S. launch, which began tentatively around a year ago. This has been more successful than was expected, seeing Cleo add 650,000 active U.S. users to date. The U.S. currently makes up over 90% of new users now, too. Overall, the fintech claims 1.3 million users have signed up to the Cleo chatbot and app, with 350,000 active in the U.K.

Accessible via Facebook Messenger and the company’s iOS app, Cleo is an AI-powered chatbot that gives you insights into your spending across multiple accounts and credit cards, broken down by transaction, category or merchant. In addition, Cleo lets you take a number of actions based on the financial data it has gleaned. This includes choosing to put money aside for a rainy day or specific goal, sending money to your Facebook Messenger contacts, donating to charity, and setting spending alerts and more. 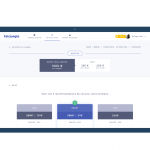