Cledara, a startup that has developed a SaaS to help companies manage their SaaS spending — as if things couldn’t get any more meta — has picked up pre-seed backing from the recently announced Anthemis/BBVA strategic partnership, and others.

In total, the startup has raised $930,000. This includes completing the Techstars London accelerator, along with investment from various angels, such as Chris Adelsbach.

Founded in July 2018 by Cristina Vila, after she experienced the SaaS management nightmare first-hand while working at London fintech Dopay, Cledara has developed software to let companies track and manage their SaaS usage and spending, including analytics to help understand if it is money well spent.

Another feature is unlimited virtual debit cards to empower employees and even outside teams to purchase appropriate SaaS offerings independently. This includes the option for management to approve every purchase before it happens and access real-time updates on what everyone is buying.

“Previously, I was responsible for the operations of a fintech company, and as part of my job I had to streamline processes which meant that I had to know what software people were using to do their job,” Vila tells me.

“Turns out, that that was a real challenge. We had offices in 3 different countries, remote developers, people working from home all signing up for different SaaS products and then expensing them back to the company. So I had to manually go around and ask everyone to fill in a spreadsheet to get the data, which was impossible because people only wrote those that they were actively using and could remember”. 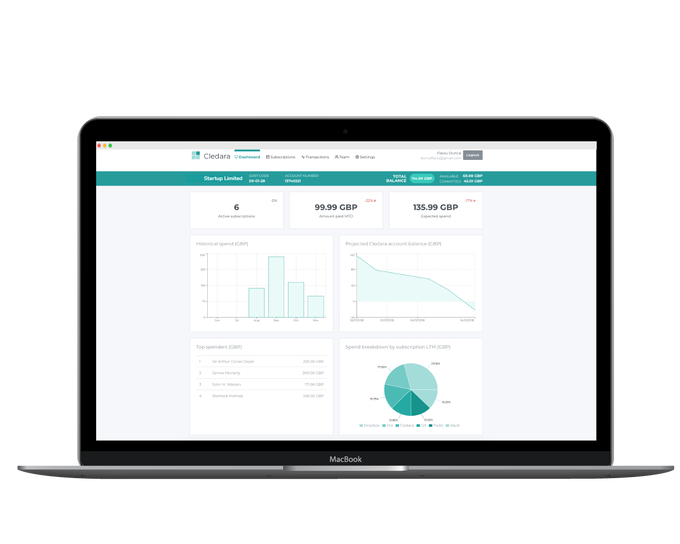 Vila says this also caused problems for the finance team, since they could see payments going out each month but didn’t always know what they were for. “I looked around for solutions, spoke to founders to see how they were managing it and when the best answer was ‘Google Sheets’ I realised that something like Cledara had to exist”.

Describing the macro problem that Cledara hopes to solve, Vila says that every year companies waste more than $20 billion on duplicate, unused or forgotten software subscriptions. “There are dozens of companies that help sellers of subscription software optimise their sales but there is basically none that helps companies buy and manage their software subscription in a scalable way,” she adds. “We believe that unless companies have a way to manage cloud software at scale, it will be very difficult for SaaS to reach the mass market”.

To that end, Cledara is being pitched as a purchasing and analytics platform that enables companies to manage and control recurring subscription payments. In this sense, it is a fintech as much as a traditional SaaS — hence the Anthemis/BBVA backing.

Vila cites direct competitors as companies like Soldo, Pleo or Spendesk. “We are different in that we are fully focused on helping tech companies with the purchase and the ongoing management of their subscriptions because everything is becoming a subscription and the way to manage one off payments if very different to the way in which we manage recurring payments,” she argues.

“Also, we are building a collaborative platform, hence breaking the traditional finance silo where all the data is gathered but not shared. We want to provide that data to the business as they are the ones that can take action based on the analytics and insights”.

Meanwhile, the startup generates revenue from subscription fees, and through interchange fees via the Cledara virtual Mastercard debit cards its customers use to make SaaS purchases.