Cambridge, UK based graphene startup, Paragraf, has closed a £12.8 million (~$16M) Series A round of funding led by early stage VC  Parkwalk. Also investing this round: IQ Capital Partners, Amadeus Capital Partners and Cambridge Enterprise, the commercialisation arm of the University of Cambridge, plus several unnamed angel investors.

The funding will be used to bring the 2015-founded Cambridge University spin out’s first graphene-based electronics products to market — transitioning the startup into a commercial, revenue-generating phase.

When we covered Paragraf’s $3.9M seed raise just over a year ago CEO and co-founder Dr Simon Thomas told us it was looking to raise a Series A ahead of Q3 2019 so the business looks to be right on track at this stage.

During the seed phase Paragraf says it was able to deliver a manufacturing facility, graphene layer production and first device prototypes “significantly” ahead of plan.

It’s now switching focus to products — with strategic volume device production partners, and commercialisation of its first device: A super-high sensitivity magnetic field detector which it says operates over temperature, field and power ranges “that no other device can currently achieve”.

Commenting in a statement, Thomas added: “I am extremely proud of the young team at Paragraf who have collectively delivered the early strategy milestones with great skill. This next phase will allow Paragraf to make these truly game-changing technologies a reality. Paragraf is continually seeking like-minded collaborative development, production and commercial partners to accelerate the delivery of the many exciting electronics technology opportunities graphene has to offer.”

In terms of the touted benefits of graphene, the atom-layer-thick 2D material has long been exciting scientists as a potential replacement for silicon in computer chips — thanks to a raft of key properties including high conductivity, strength and flexibility and thermal integrity. Researchers suggest it could deliver a performance speed increase of up to 1000x, while reducing energy use by up to 50x.

But while excitement about how graphene could transform electronics has been plentiful in the more than a decade since it was discovered, those seeking to commercialize the wonder material have found it challenging to manufacture at commercial grade and scale.

This is where Paragraf aims to come in — claiming to be the first company to deliver IP-protected graphene technology using what it bills as “standard, mass production scale manufacturing approaches”.

Such claims of course remain to be tested in the wild but Paragraf isn’t dialling down the hype vis-a-vis the transformative potential of baking graphene into next-gen electronics.

A year ago Thomas told us Paragraf expected high-tech applications of graphene in consumer technologies to appear in the general market within the next 2-3 years — a timeline that should now have shrunk to just a year or two out. 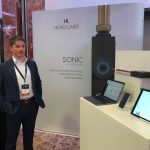