Blueground, the startup providing turnkey flexible rental apartments, has raised $20 million in a round led by Athens-based VentureFriends, with participation from Endeavor Catalyst, Dubai’s Jabbar Internet Group, and serial entrepreneur Kevin Ryan. Ryan – who helped found MongoDB, Gilt Groupe, Zola, and others – will also join Blueground’s Board of Directors.

It’s no secret that remote work and frequent business travel are becoming more and more commonplace. Now, as a result, a growing number of people are shying away from lengthy rental or lease commitments and are instead turning to companies like Blueground for more flexible short-term solutions.

Blueground is trying to be the go-to option for individuals moving or traveling to a city for as little as a month, or any duration longer. Similar to flexible office space providers, Blueground partners with major property owners to sign long-term leases for units it then furnishes and rents out with more flexible terms.

Users can rent listings for anywhere between one month to five years and rates are set on a monthly basis, which can often lead to more favorable prices over medium-to-long-term stays relative to the short-term pricing structures commonly used by hospitality companies.

CEO Alex Chatzieleftheriou is intimately familiar with the value flexible leasing can unlock. Before founding Blueground, Chatzieleftheriou worked as a consultant for McKinsey, where he was frequently sent off to projects in far-off cities for months at a time – living in 15 different cities over just seven years.

However, no matter how much time Alex logged in hotels, he constantly felt the frustration and mental strain of not having a stable personal living arrangement.

“I spent so much time in hotels but they never really resembled a home. They didn’t have enough space or enough privacy,” Chatzieleftheriou told TechCrunch. “But renting an apartment can be a huge pain in these cities. They can be hard to find, they usually have a minimum rental term of a year or more, and you usually have to deal with filling out paperwork and buying furniture.”

Knowing there were thousands of people at his company alone dealing with the same frustrations, Alex launched what would become Blueground, beginning with a handful of apartments in his home city of Athens, Greece.

Chatzieleftheriou and his team structured the platform to make the rental process as seamless as possible for the needs of flexible renters like himself. Through a quick plug-and-play checkout flow – more similar to the booking process for a hotel or Airbnb – renters can lock down an apartment without having to deal with the painful, costly and time-consuming traditional rental process. Tenants are also able to switch to any other Blueground listing during their rental period if their preferences change or if they want to explore different locations during their stay.

Every Blueground listing also comes completely furnished by the company’s design team so renters don’t have to deal with buying, transporting – and eventually selling – furniture. And each apartment comes outfitted with digital and connected infrastructure so that tenants can monitor their apartment and arrange maintenance, housekeeping and other services directly through Blueground’s mobile app.

The value proposition is also fairly straight-forward for the landlords Blueground partners with, as they avoid costs related to marketing and coordinating with fragmented brokers to fill open units, while also benefitting from steady rental payments, tenant vetting and free property management.

The offering certainly seems to be compelling for renters – While Chatzieleftheriou initially focused on serving business travelers and those moving for work, he quickly realized the market for flexible leasing was in fact much bigger. Blueground’s sales have tripled over the past three years and after its expansion in the US last year, Blueground now hosts 1,700 listings in ten cities across three continents.

“The trend of flexible and seamless real estate is bigger and is happening everywhere,” Chatzieleftheriou said. “A lot of people throughout the real estate sector really want this seamless, turnkey, furnished solution.”

To date, Blueground has raised a total of $28 million and plans to use funds from the latest round for additional hiring and to help the company reach its goal of growing its portfolio to 50,000 units over the next five years. 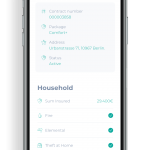