Amazon has reportedly acquired Israeli disaster recovery startup, CloudEndure. Neither company has responded to our request for confirmation, but we have heard from multiple sources that the deal has happened. While some outlets have been reporting that the deal was worth $250 million, we are hearing that it’s closer to $200 million.

The company provides disaster recovery for cloud customers. You may be thinking that disaster recovery is precisely why we put our trust in cloud vendors. If something goes wrong, it’s the vendor’s problem, and you would be right to make this assumption, but nothing is simple. If you have a hybrid or multi-cloud scenario, you need to have ways to recover your data in the event of a disaster like weather, a cyber attack or political issue.

That’s where a company like CloudEndure comes into play. It can help you recover and get back and running in another place, no matter where your data lives, by providing a continuous backup and migration between clouds and private data centers. While CloudEndure currently works with AWS, Azure and AWS, it’s not clear if Amazon would continue to support these other vendors.

The company was backed by Dell Technologies Partners, Infosys and Magma Venture Partners, among others. Ray Wang, founder and principal analyst at Constellation Research, says Infosys recently divested its part of the deal and that might have precipitated the sale. “So much information is sitting in the cloud that you need backups and regions to make sure you have seamless recovery in the event of a disaster,” Wang told TechCrunch.

While he isn’t clear what Amazon will do with the company, he says it will test just how open it is. “If you have multi-cloud and want your on-prem data backed up, or if you have backup on one cloud like AWS and want it on Google or Azure, you could do this today with Cloud Endure,” he said. “That’s why i’m curious if they’ll keep supporting Azure or GCP,” he added.

CloudEndure was founded in 2012 and has raised just over $18 million. It most recent investment came in 2016 when it raised $6 million led by Infosys and Magma. 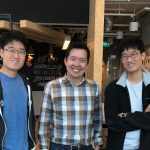