Months after a big round, African fintech startup Jumo has pulled in a fresh $12.5 million to add more fuel for its expansion into Asia Pacific.

The new investment comes from London-based investment fund Odey Asset Management, and it is an extension to a $52 million round that closed back in September. The deal takes Jumo, which recently moved its headquarters to Singapore, to $103 million raised from investors. Its backers include Goldman Sachs, Proparco — which is attached to the French Development Agency — and Finnfund, and it was part of Google’s Launchpad accelerator last year.

Founded in 2014, Jumo specializes in social impact financial products, such as microloans, savings and insurance. It started out in Tanzania, and today it claims to have originated over $1 billion on loans. Since September, when it announced a first expansion into Asia via Pakistan, it claims it has grown to 10 million people saving or borrowing from its platform from a previous nine million. The company has some 350 staff across 10 offices in Africa, Europe and Asia.

Over the last year, the company said it has doubled the number of financial service providers and telcos on its platform. Of those deals, one of its highest profile is a digital finance product for Uber drivers that’s live in Kenya. That collaboration is likely to expand in Africa and potentially beyond, Jumo said.

Expansion is very much the name of the game all round for the company. Jumo CEO Andrew Watkins-Ball told TechCrunch in September that there are plans to expand to more Asian markets next year but, for now, the company isn’t saying which ones. 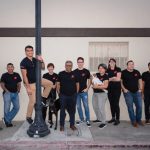